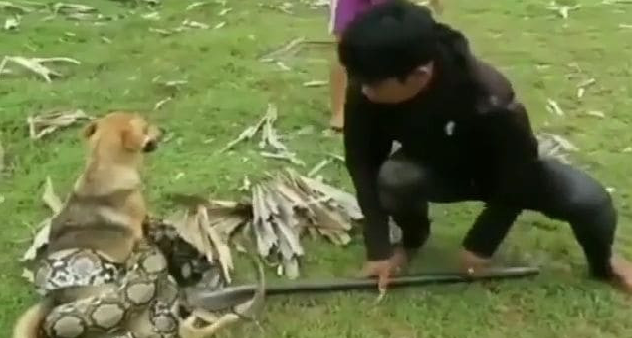 A video has appeared online that captures the incredible moment when 3 little boys were able to pull their dog out of the iron grip of a snake that wrapped around the lower part of the animal’s body.

The video shows how the older boy is trying to keep the snake’s head pressed against the grass with something similar to a metal table leg, while two younger guys are trying to make the snake loosen its grip by throwing leaves and tree bark at it.

The children turned the dog from side to side to help throw off the snake. But first they managed to remove only part of the reptile from the dog. Then they decided to take the snake from both sides, stretching it in opposite directions to loosen its grip for a time long enough for the dog to free itself.

The most interesting thing is that while her little owners were fighting with the reptile, the dog seemed more surprised than scared. After her amazing release, she looked quite normal.

The last frames of the video show the older boy holding the writhing snake in silent triumph. Moreover, it is quite obvious that the length of the reptile exceeds the height of the teenager himself.