Friendship between a cat and a dog is not uncommon today. Owners who love both animals equally are not afraid to have them under the same roof. They get so used to each other that they become best friends. Dogs often become big brothers to cute kittens. In Florida’s Seminole County, an American pit bull terrier saved a cat from dangerous coyotes.

A woman named Sherry Lewis and her son Peter lived near each other. The mother had a cat named Kitty, and the son had a pit bull named Jack. Peter worked in the military, and because of his frequent travels, he often had to leave his cat at his mother’s house. Kitty and Jack became very good friends. What’s more, the dog even took over custody of the kitty. The dog was very protective of the cat. He didn’t go far away from her, as if he was worried that something might happen to her. Jack’s hunch did not fail, and one day Kitty got into trouble. 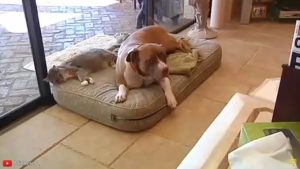 Sherry looked out the window of her house because she heard a dog barking. It was Jack, so he was getting the owner’s attention. As soon as the woman saw what had happened, she immediately rushed into the yard. Two coyotes grabbed her pet in hopes of eating her, but they failed. 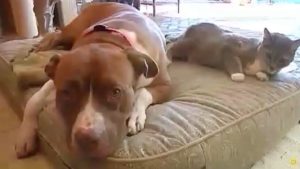 Coyotes are considered wild dogs in the United States. They are highly adaptable around humans and can easily hunt small rodents or pets. They hunted Kitty for food. But they had no idea that she had reliable protection in the form of Jack. He pounced furiously on the coyotes and frightened off his detractors.

As the coyotes disappeared into the thicket, the owner rushed to the cat’s aid. She saw that Kitty was badly hurt. She was immediately taken to the veterinarian clinic, where she received first aid. She recovered despite the cat’s distress. And Jack now never leaves his pet alone for a minute. 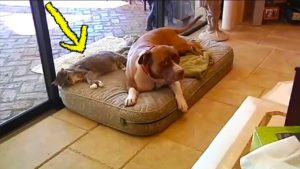