An ABC News media company drone fell victim to a saltwater crocodile while on “duty. While the drone was flying over a body of water in Darwin, the capital of the Northern Territory of Australia, the reptile made an incredible leap out of the water and grabbed the machine right in the air.

It happened at the very moment when ABC cameraman Dane Hurst was shooting an episode of the documentary “Crocodile Territory” dedicated to the 50th anniversary of the ban on hunting ancient reptiles. 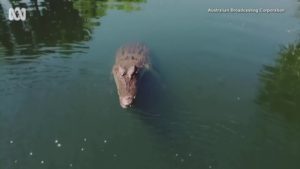 “I lifted the drone over a small lagoon in Crocodilus Park. It was particularly hot that day and all the crocodiles were hiding. But one crawled out of the shadows and watched the drone closely. I also thought: great, I’ll use this guy to take pictures. And then at some point I got distracted and all I heard was a loud clang of jaws.”

When Mr. Hurst looked up, the drone was gone. 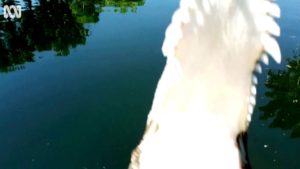 “I looked at my controller and saw a blank screen and no communication. My first thought at the time was, wow, that was a brand new drone, I’m going to have a hard time explaining to my boss where it went.” 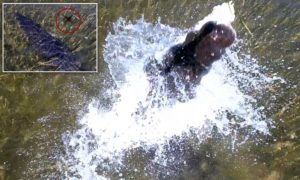 For a while, the drone was thought to have perished in the belly of a crocodile. But two weeks later it was found on the shore of the lagoon, mangled and with bite marks.

It was damaged and could not be repaired. But most importantly, the map with the footage survived! This allowed the team to reconstruct what was filmed before the drone’s demise, including the last moments of its life. You can see it in the video, too.