Amid the scorching heat, everyone looks for a bottle of water, especially when out on the road. Animals are no different. And when a monkey in Maharashtra’s Malshej Ghat was looking to quench its thirst, a little help from a human friend went a long way. 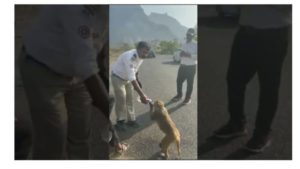 The monkey is seen standing and drinking water from the bottle offered by the police officer. Clad in a traffic police uniform, the man is seen gently giving water to the animal. The monkey is also seen looking backwards as a car passes by and continues to drink water. 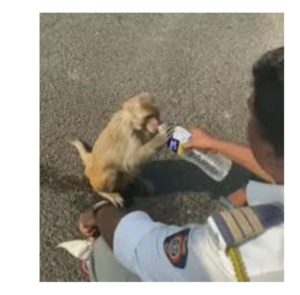 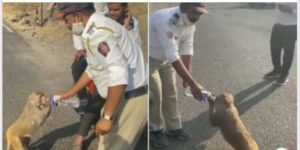 The police officer earned plaudits online for his kind act.

“Love and kindness is such a wonderful feelings who knows only they can feel. My Salute to all,” commented a user.

Some users also raised the need for arranging water for animals.

“I think there can be man-made ponds created in forests which can be filled water trucks regularly,” commented another user.