Pets are thrown into shelters and kennels for a variety of reasons. Because they are too old, because they have behavioral problems, or because their family is moving and doesn’t want to take it with them. Are these or any other justifications valid?

Leila is a young pit bull puppy. She was staying at the shelter because her owners thought they already had too many pets. That’s why she was kicked out on the street. And the poor dog was taken in by an organization that rescues homeless, abused and neglected animals. The owner of the dog explained that she lived with five children and two other dogs. And that she was kicked out because of the large number of pets.
“It’s very sad.”

Leila was especially close to her family’s 2- and 7-year-old children. When the dog was abandoned, she was disoriented and didn’t know how to act.

“She was obviously very uncomfortable at the shelter and not feeling very well,” said a shelter worker.

“A lot of dogs are stressed by the shelter situation. They’ve lost everything. This dog was very close to the children at home, so it’s not surprising that she was uncomfortable at the shelter.”

The only thing that seemed to bring comfort to Leila was a plush toy. 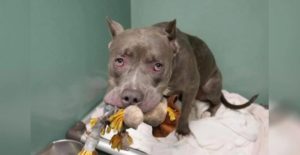 “She doesn’t leave that plush toy outside or in the yard, never lets it go.” 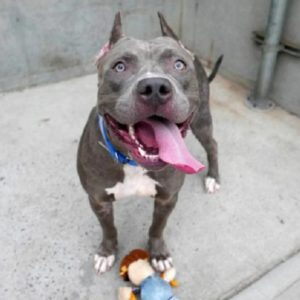 “She’s calming down with her little soft friend,” the shelter staff said. 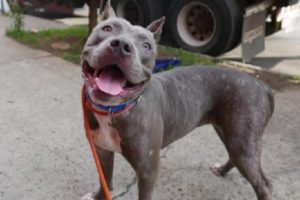 Leila is happy in her own way. Even though she doesn’t have her own home yet, she is a cheerful and lively dog.