A cat named Fluff, like all other cats, loved to walk, climb trees, watch the neighboring dogs, and hunt birds. But one day Pooh was hit by a car – the wheel ran over his back paws. The cat only had enough strength to crawl to the doorstep of the nearest house, where he was found by people.

They didn’t hesitate to call the vet service. Fluff was lucky – he was in the hands of a good doctor. Often when such injuries occur, the unfortunate animal is put to sleep, but the vet decided to perform a very complicated operation – to amputate the animal’s hind limbs and replace them with titanium prostheses. 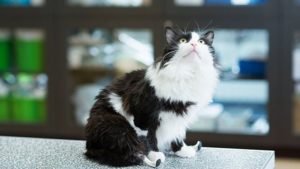 Soon the implants, made especially for Fluff, were installed in the bones, and on top of them were put covers that would need to be replaced as they wore out. 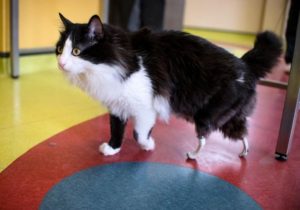 Contrary to the concerns of doctors and owners, Fluff accepted his artificial limbs without any problems – after adapting to them for a few days, the cheerful cat began to play and walk, and then to run. Fluff now has no problem jumping on chairs, jumping over obstacles, and even standing on his hind “paws” when he plays. 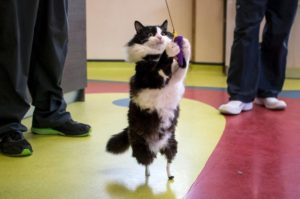 Fluff lives in a shelter in Sofia, but hopefully, as you read these lines, the cat has found owners who will take care of him for life – Fluff needs regular visits to the vet to have his implants checked.

The doctor hopes that the unique surgery he performed (there are only a few of its kind in the world) will set an example for other vets and allow animals who have lost limbs to get back on their feet.