I’ve been helping homeless animals for a long time now, and I’ve seen a lot. But even I was shocked by the photos of this dog. Jack had been living on the street for three years. All that time he was near people. But not only did none of them want to help him themselves, but no one even bothered to write about him in social media or volunteer groups. No one took the time to report that Jack needed help.

Anya and her family purchased a home in the township in the spring. She immediately saw that Jack was in a terrible condition and started looking for people who could help the dog. According to local residents, Jack used to have a home and an owner. But as soon as the dog got sick, he was kicked out of the house. How the dog survived all this time remains unclear. Most likely, the only thing that kept him in this world was an uncontrollable desire to live.

We got an ophthalmologist’s consultation online. The doctor presumed trauma, as a result of which the cornea was damaged. She also noticed traces of inflammation of the inner membranes and increased eye pressure. According to the doctor, there was almost no chance to save the eyes, they would have to be removed. We were also advised to check the eye pressure. 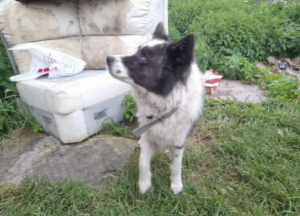 We immediately made an appointment for the dog to see an ophthalmologist. Jack will have to undergo a detailed examination.

For now the dog lives at Anya’s house. This is a temporary solution. But now he’s safe, and that’s the most important thing.