For many people, mornings start with the usual routine: getting ready and driving to kindergarten and work. That’s exactly how it was on this day. Everyone was rushing about their business without noticing the dog, who could not even get up on his paws, was crawling along the road with difficulty.

The dog was skinny, so we were surprised when we found out he had owners.

The dog’s owner works hard and is not always home, not just during the day, but even at night. His wife is busy with the kids. So none of them paid much attention to the fact that their dog Rich would sometimes run away for a few days.

Around 10 o’clock the dog lay wounded in the snow, and the perpetually rushing people just walked by. Only two men stopped by the dog. It was only thanks to them that Rich came to me. 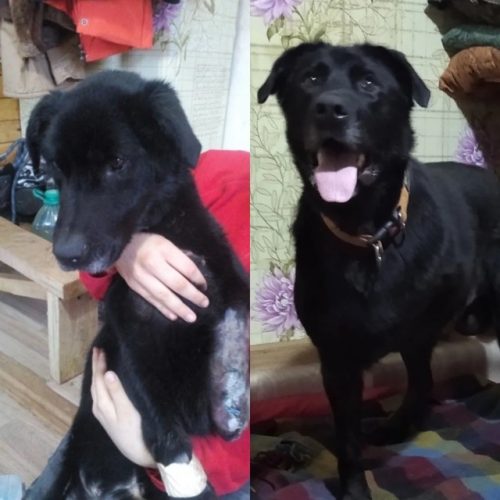 It took three months to recover. One front paw could not be saved. On the second paw, several toes were removed, and the pad was mutilated. We treated his avitaminosis and neutered Rich, and helped him to trust people again. Now the dog is ready to go home.