It took Alexei fifteen minutes to get home. During this time he was completely immersed in his thoughts. Alexei wanted to get home as soon as possible, turn on a movie and order a pizza to spend a quiet evening.

A stray dog had completely different plans for the evening. The animal was standing outside the store, hiding under a small awning against the cold rain.

For unknown reasons, the dog decided to follow Alexei, although the man did not even pay any attention to him. Maybe, intuition told the dog that this man would not hurt him, or maybe he felt the need to follow him. 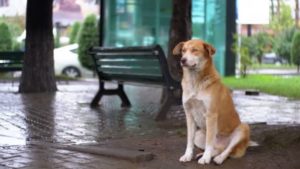 Alexei was listening to music and thinking about plans for the evening, so he didn’t even notice the dog following him. The rain gradually ended and the sun appeared in the sky.

Only three blocks later did the man notice that all this time he was not walking by himself. Alexei checked his pockets, but there was nothing in them with which to treat the animal.

– Will you wait for me while I go buy you something? Don’t run away, okay? – said the man and went shopping.

The dog really waited for the man and gladly ate the offered treat. Alexei thought that after that the dog would leave. But the dog still continued to follow him leisurely.

The dog stopped outside the entrance. The dog had always lived in the street and had never been allowed into the house. Alexei opened the door and held it, inviting the dog in. The dog had to summon up all his courage to enter the entryway. Shuddering and stifling, the dog made his way up the stairs and stopped in front of another door. It took all his courage to enter the apartment. But almost immediately he realized that this journey was not in vain. It was also only in his apartment that Alexei realized that the dog had come here for a reason.