When we think of huge dogs, we immediately think of the German Dane. This breed is truly unbelievable in size.

Freddy is the biggest German Dane in the world. He lives in Essex, England. His size is simply fantastic: Freddy’s height – 2.28 meters! It is the tallest dog in the world.

When Claire Stoneman brought Freddy home, she knew Freddy would grow up to be a giant dog. But she never imagined he would grow to be the biggest dog in the world. 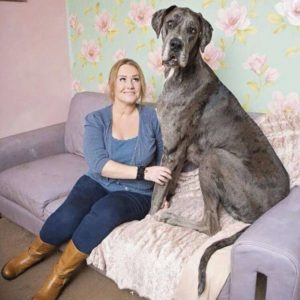 If Freddy stood on his hind legs, he would be 61 centimeters taller than his owner. The dog weighs more than 90 kg.

Last year he was officially listed in the Guinness Book of World Records as the world’s largest dog. 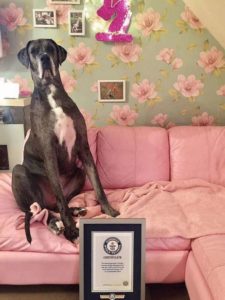 While many are repulsed by the dog’s enormous stature, Claire says she loves her pet very much.
Freddie lives with Claire, her children, and her sister, Flouer the Dane. 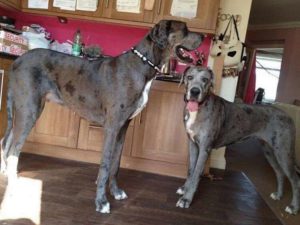 Freddie and Fluer eat an unimaginable amount of food. According to Claire, their favorite treats are fried chicken and peanut butter on toast. 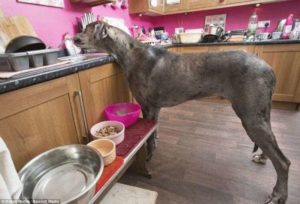 The grocery bills for each dog alone total more than $15,000 a year. Add in destroyed furniture and other broken household items. 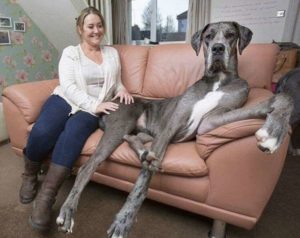 “I would come home and find a sea of foam on the floor. But I adore him, and I can’t imagine my life without him,” Claire said.
She now takes lots of walks and cooks lots of meals for her beloved fosters. 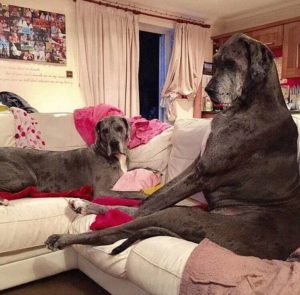 Walks usually take about 40 minutes and need to leave early in the morning to avoid encounters with smaller dogs who might be frightened by his size. This is also a precautionary measure, as Claire will not physically be able to hold her pet if something goes wrong. 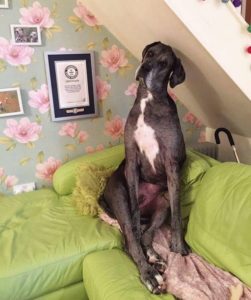 Of course, Claire doesn’t believe this could happen. Freddie is a little older and calmer now. He prefers to stay at home, snuggling up to his family.