The small dog, chained to a chain, was noticed by a woman who was driving nearby. It was freezing outside and raining ice from the sky. But the dog did not even try to hide from the inclement weather in the kennel. When the woman came closer, she saw that there was a big dog in the kennel, which just would not let the baby inside. 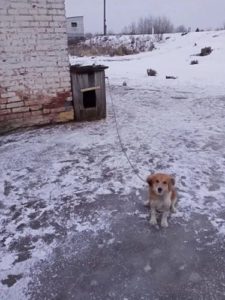 The woman looked around, but could not understand why the baby was chained. There was nothing to guard here. An abandoned stretch of railroad and an empty guardhouse, nothing of value was near the dog. There was only the remains of bones in a bowl not far from the kennel. 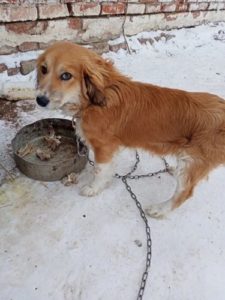 The woman decided to help the puppy and started bringing him food on a regular basis. Stray dogs living in the area often took food away from the baby, so the woman had to stand near the kennel and wait for the puppy to eat. Every day the woman fed the dog and she never once saw people around. Perhaps the bones in the baby’s bowl were left by people who cared enough to notice the animal from the road.

The woman turned to volunteers for help. Now the baby is already warm and under the supervision of veterinarians. As soon as the doctors are convinced that his health is okay, the baby will start looking for a new home. 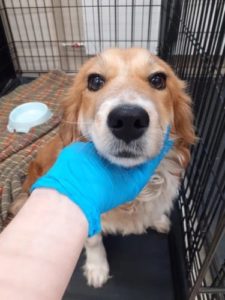 The puppy’s character is more like that of a cat who was mistakenly trapped in the body of a small red dog. He is affectionate and gentle, it is not at all clear for what faults they decided to chain him up.

Richard Gere was forced to play «Pretty Woman» by just three words that Julia Roberts said to him
The cast of the beloved melodrama could have been very different. It’s been 32
POSITIVE 0 5

Kate Winslet met a brave man who saved her from her burning house: he later became her husband
Kate Winslet has been a popular figure in Hollywood since her performance in «Titanic».
CELEBRITIES 0 6