Who says animals don’t have feelings? Although they are different creatures from us humans, many of them understand and can even communicate their state of mind. Animals cling to their owners and demonstrate this very often with their expressions of affection. Suffice it to say that when a couple separates or divorces, the animal suffers because it is suddenly deprived of the presence of one of its owners or, even worse, finds itself in a completely different environment. This is why the goat in this video seems to be completely desperate. 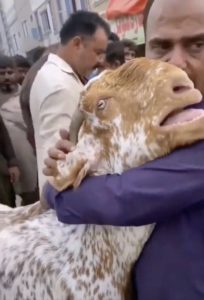 A man posted on Twitter the sad scene of a goat that does not seem to want to leave its owner. The latter, however, is in dire need of money and that is why he was forced to sell the goat to the highest bidder. The video is heartbreaking because you can clearly hear the crying of the little goat, a sound that is very reminiscent of the crying of a child or a human. The owner hugs her and it seems that she doesn’t want to part with him, even though her fate has already been determined.

“Although animals cannot speak, they still have feelings and emotions. Although they cannot speak, they love their owners very much. When separated from them, they become sad and grieving,” wrote Ramasubramanian V. Harikumar, the Indian man who posted the video. 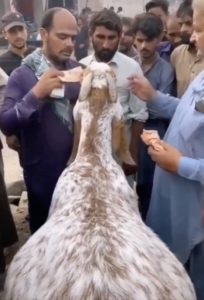 “all animals have feelings, regardless of what humans believe. I pray that the person who bought the goat takes good care of it.”

It is not news that goats can read each other’s feelings and are particularly attracted to happy people, but to see one that is so obviously attached to its owner is even more heartwarming. The sadness is great in knowing that the goat has some sort of awareness of the fact that its owner is abandoning it. Unfortunately, it seems that he could not do otherwise and that his little goat will have to adapt to another life. We hope she will be happier!

Do you also believe that animals have feelings?