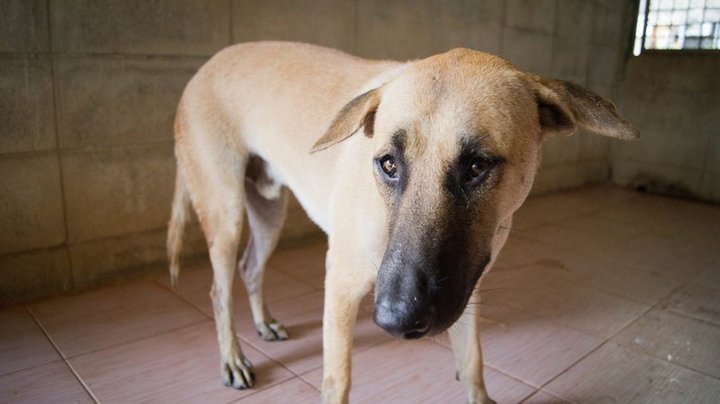 The story of the rescue of a dog that lived in a cage at the butcher.

A dog sitting in a tiny cage watched dozens of other dogs being killed right in front of him. The dog was trembling with fear – he knew that he would be next.

Police and Soi Dog Foundation investigators arrived at the butcher’s plot near Chiang Mai (Thailand). Rescuers freed the trembling dog from the cage. He was the only one who remained alive, and they called him Bunrod, which means “survivor” in Thai.

Rescuers took Bunrod to a rescue center on the island of Phuket. The dog was safe, but seriously injured. And when people approached, he shrank and trembled.

After several weeks of rehabilitation, Bunrod learned to trust people again, and rescuers posted information about him on the Facebook page.

“I just fell in love with Bunrod,” Tonussi says. “His story was full of meaning. He was supposed to come to Italy and be my dog.”

“When he arrived in Italy, Bunrod was very tired from a long journey. At home, my husband and I focused on providing him with maximum comfort. We spoiled him a little!”

The family already had two dogs – Fala and Sole. After a few weeks, they became best friends with Bunrod.

“He is such a good and gentle dog that it is impossible not to love him.”