Mom Patricia Drauch was on her way to get something from her garage and thought her 14-month-old son, Stanley, was right behind her. But when she didn’t see him, she immediately went to the yard where to her horror she saw her son had fallen into the swimming pool. The toddler appeared blue, but he was luckily face-up in the water thanks to their Labrador Retriever, Bear! Bear was in the pool underneath Stanley, propping the boy up on his back so that Stanley’s head was out of the water.

Patricia pulled her son out of the water and called 911. But when she couldn’t get through on her cell phone, she rushed to her car and went to the nearest department for help. On the way, she was able to call 911. The paramedics examined Stanley and found him in good shape. He was then taken to the hospital and discharged later that day. 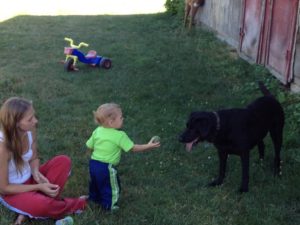 Patricia knows Bear saved her son’s life and attributes it to the strong bond the dog shares with her children.