The photos illustrate the current state of this cat very well. There is no need to think about finding a family in such a situation. We couldn’t even say with certainty that we would arrive on time and find the cat alive. 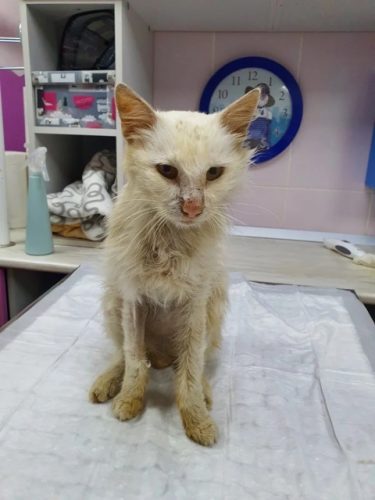 As soon as we agreed on a meeting during which we had to pick up the cat, we immediately began to make an appointment with the veterinarian.

As it turned out, the photos did not fully reflect reality. In fact, the cat looked even worse than we thought. There was clearly a plea for help in his gaze. I do not know how long the cat lived without food and water, but as a result he earned dystrophy and dehydration.

When I brought the cat home, I wanted to wash it, but I didn’t know how to do it. The cat was so thin that it was scary to even touch him. In addition, it was obvious that every muscle ached. The cat had not eaten for so long that at the sight of boiled chicken he screamed so much that it seemed he would fall from exhaustion.

When they took the cat to the clinic, they were sure that they would prescribe ivs and conduct examinations. The tests did not work out, there is simply no vein suitable for this on the animal’s body. There are no muscles and fat in the cat’s body. He is literally a walking skeleton. Due to the lack of food, the cat’s body literally began to eat itself.

The veterinarian said first of all to fatten the cat, and also prescribed treatment for parasites and droppers as soon as the veins arrive on the body.