Oksana found two puppies. The babies had been thrown into a garbage can and were squeaking with all their might, calling for help. Oksana already had a dog at home, rescued from the street. And she could not take a couple of little ones for herself as well. She could not turn around and leave without even trying to help them either. So the puppies ended up at Oksana’s home. 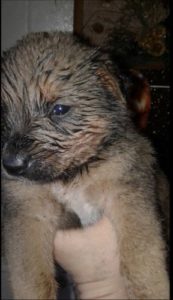 The babies were still very tiny. It was not even clear what kind of breed they were. Visually, the woman determined their age as three weeks old, or perhaps even less. Oksana washed and fed the babies. And in the evening her dog Alpha took care of them, taking them to her dog bed.

Alpha had lost her puppies at one time and had already managed to nurse three others. And now she has seriously taken on the care of the babies. The babies were very happy to find a new mother, and Alpha, in turn, proved to be the best guardian for Teddy and Masha. Perhaps this story would have been a happy exception, but enteritis got in the way of a happy ending. At first Teddy was sick. But the vets were able to help him. Then Masha got sick. She was treated for a long time, and the doggy recovered.

Teddy very quickly found a new family, but Masha is almost 3 months old, but no one is willing to give her a new home. 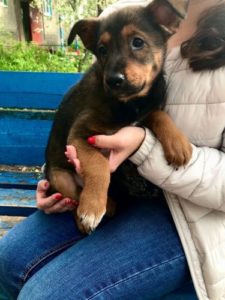 As Masha gets older, she looks more and more like a shepherd, but she has the character of a Staff Terrier. After all, she got most of her habits from Alpha. The little dog faithfully guards Oksana and her daughter, while getting along well with other animals. In addition to Alpha, whom the little dog considers her mother, she has also made friends with Kiryukha, a Labrador who also lives in this family. 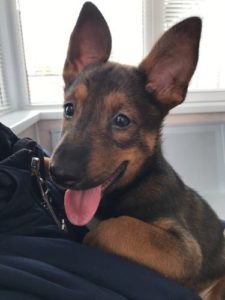 Masha is unusually affectionate and beautiful, and she is also an obedient girl. Her beautiful standing ears make it possible to guess Masha is a shepherd, as well as her size. At three months of age, she weighs more than 6 kilograms. The girl has an amazing chocolate color. We want to believe she will find a loving family soon.

ANIMALS 0 49 views
Linda was lying in the snow not far from the shelter. The dog was

Businessman finds poor girl’s letter to Santa and decides to grant her Christmas wish
Sergio parked his car near a bank branch. It was already late afternoon, but
LIFE STORIES 0 37