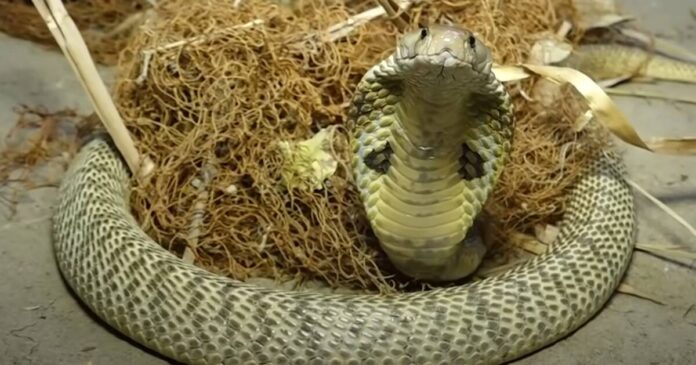 King cobras lead in length among all venomous asps. These reptiles are extremely dangerous. But their formidable appearance and grace make an indelible impression. Interestingly, the Portuguese called these snakes cobras back in the XVI century, when they first decided to establish a colony in India and discovered spectacled snakes. They dubbed them cobra de capello, which can be translated as “snake in a hat”. And after them, the name “cobra” was adopted by other peoples of the world.

Not far from the rice fields in Eastern India, people noticed a young cobra. Adults grow up to 5 meters, and this one was about one and a half. In addition, it is the young that most often come to the fields where people cultivate rice and other crops. There are a lot of rodents that young cobras feed on. The snake found was in trouble. She got tangled in an old fisherman’s net and couldn’t get out. Then the residents of the neighboring village called for the help of the snake rescuer Mirza Arifa.

The man caught the snake and put it in an open place where it is more convenient to observe the reptile. To calm the snake, he gave it a drink of water from a bottle, and then, holding his head to avoid being bitten, he began to cut the net with scissors. After a couple of minutes, the snake was free. To prevent the snake from settling in the village and biting its inhabitants, it was decided to return the asp back to the forest next to the rice field. Arif expertly placed the cobra in a large bottle and then released it into the wild. The villagers were jubilant with joy, but kept away from the royal person. Although some do strange things and try to kiss cobras.

This story raises the question for many people who are far from India and Indian culture: why it was impossible to get rid of the snake while it was in a vulnerable position. After all, she is very dangerous. But they will never do that in India. After all, despite the lethality of the reptile, the inhabitants of the country treat cobras with reverence. A cobra that crawls into the house is considered a guest and a good sign, and therefore it is cajoled and treated. Moreover, the snake cult is still active in the south of the country. People worship these reptiles. Destroying a cobra is a grave sin, and salvation is a big plus to karma.