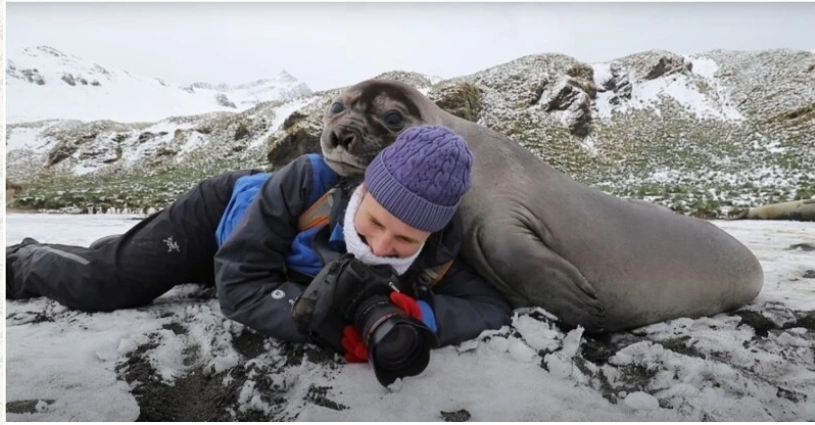 A wildlife photographer was filming penguins when a young seal became interested in her. The animal crawled up to the woman lying on the snow and put her head on her back.

The photographer, who is the husband of the main character, captured this unusual incident.

The girl passed the test, withstood the weight of a 100-kilogram marine inhabitant and demonstrated all the dangers of the profession of a wildlife photographer.

“My wife and I are wildlife photographers. I’m shooting for Australian Geographic magazine. Last summer we held our first photo tour in Antarctica. The incident with the elephant seal occurred when we were on the shore of the island of South Georgia. The huge pebble beach was literally filled with king penguins and sea elephants. My wife Jess was lying down on the ground to capture the royal penguins passing by, when suddenly one of the huge seals literally perched on top of her.

Before she realized what was happening, the adorable animal crawled on top of her. Soon he was joined by a second inquisitive representative of the local fauna, who, fortunately, limited himself to the study of my wife’s shoes. It’s dangerous to be a wildlife photographer!”