Two divers were swimming in the waters near Hawaii, hoping to feel a closer connection to this mysterious underwater world and its inhabitants, but they could not have imagined how close those connections could sometimes become.

Caleb Hakes and his diving partner were making their way toward the coast of Oahu when they noticed, with some dismay, that octopuses surrounded them. But then Caleb laughed himself to tears when one of the octopus hugged him tightly, deciding to kiss him. 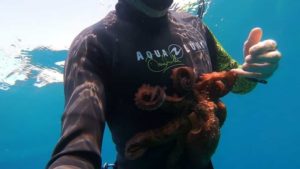 «This octopus wasn’t aggressive at all!» says Caleb, who founded the scuba diving training firm Fascinating Diving Hawaii. «Octopuses in general are very curious and smart. If you make friends with one of them, they will feel safe around you.»

Caleb and his diving partner spent about an hour with the octopus before it started cuddling.

«The octopus climbed up my arm and hugged my face, taking a Jacuzzi of air bubbles from the adjustment valve,» the diver recalled, adding that the whole time the octopus was sitting on his face, he couldn’t stop laughing.

«I didn’t expect him to place himself on my face like that, but I guess he just liked sitting in the bubbles,» Caleb says. «And then I felt the suction cups on the tentacle encircle my lips and penetrate my mouth … I must say the sensation was quite unusual.»

«To the touch, octopuses are slimy and very soft, and when they decide to leave you, they leave behind a cloud of slime. Their cup suction cups are hard to describe, but they turn out to be quite firm when an octopus wants to pull you toward it. It’s almost like being tickled.»

Still, Caleb cautions: «Even though the octopus is small, it’s very strong, and its grip is strong, so there is some apprehension when it wraps around you.» 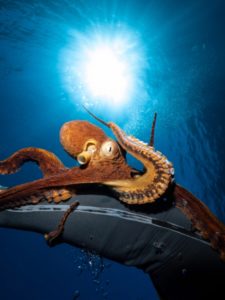 After finally letting go of Caleb’s passionate embrace, the octopus immediately hugged the female diver from behind.

Caleb notes the «eye contact as the octopus tentacles tried to figure out who he was. It’s like he’s getting inside your soul.»

«People should not try to make contact with octopuses, as some of them can be dangerous or poisonous.»

«These are wildlife, and most of them are best not touched,» Caleb says, adding that these octopuses are already familiar to him, and it took a while for them to get to know each other.