In Virginia, a 10-year-old girl was walking her dog when a man appeared next to her and violently grabbed her arm.

It became apparent that he wanted to take the young girl with him as he reached out to grab her by the arm. Fortunately, the young girl had her loyal companion by her side. The dog, whose name is not mentioned in the news, reacted quickly, grabbed the attacker’s arm and bit him. This must have frightened the man, as he quickly let go of the girl and ran away. Thanks to the dog’s quick action, the young girl was saved from a potentially fatal fate.

After the incident, officers with dogs immediately arrived on the scene. The girl gave a description of the man. He was a Hispanic male of thin constitution, weighing about 145 pounds and 5 feet 3 inches tall. He had short brown hair and a goatee. He also wore a white striped shirt and light colored pants.

Although the suspect has never been found, police continue to investigate. 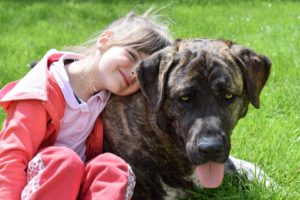 The police said that if it had not been for the dog, the man would have been able to kidnap the girl. This story proves once again that dogs do not abandon their owners and will do absolutely anything for them.