Recently two women found a cardboard box that had been standing by the woods. It was raining, snow was often falling, and the box had time to get wet. The women decided to look inside. 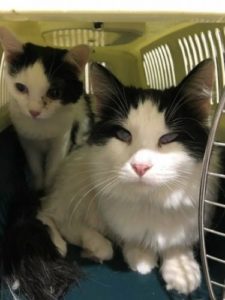 When they opened the box, they saw two cats, the ages of teenagers. The cats were huddled together in the wet box, trying to keep warm. The cats cried pitifully at the sight of the humans. It was clear that the cats had not been exposed to the forest in this weather for some reason; they had been left there to die. Women took the animals from the forest, but could not take them for themselves, so they took them to the basement where other homeless animals were warmed. 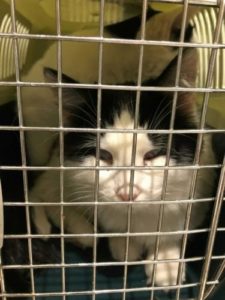 The cats used to be pets, they did not know life on the street, so they began to get very sick and eventually stopped eating. Later it turned out that it was a boy and a girl. The boy saw badly, he had films on his eyes, the girl was blind. The street cats, who had long made love to the basement, did not accept the newcomers and constantly harassed them. When I found out how hard it was for this couple to survive, I took them in. I had blind cats before, so I knew how to take care of them and decided to give these animals a chance. First of all, I took the black and white cats to the vet. The doctor diagnosed both with pneumonia and prescribed treatment. We also took care of worming and fleas. Both animals turned out to be affectionate and contactable, they love the company of people, and come to sit in their arms and purr with pleasure. 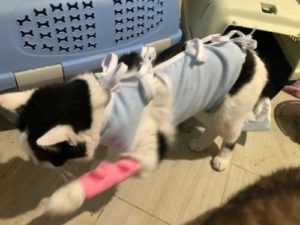 I spayed the girl and started looking for a new family for her. Finding owners for cats with peculiarities is not easy. Recently, the cat got sick again, refused to eat, started vomiting all the time. We went to the clinic again, where we consulted a doctor and had tests done.