The girl Katya was driving along the highway with her husband . At the entrance to the city, the couple noticed a puppy running out onto the road. They couldn’t pass by and stopped. The baby was clearly ill, he partially had no hair on his body. Katya and her husband fed the baby and drove on. They could not take him with them, because it is unknown what the dog is sick with. 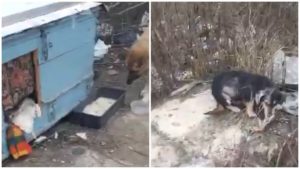 The couple constantly remembered the unfortunate puppy for several days and worried about his fate. They decided to make him a booth out of an old chest, warming it as much as possible. After all, winter was coming ahead, and the baby would be cold without a house.

The couple found the dog in the same place. He was shivering very much from the cold. But at the sight of familiar people, he joyfully rushed to meet them.

So the puppy began to live in a makeshift booth, and Katya and her husband brought him food. Once the couple noticed that a neighbor appeared in the baby’s chest. A big red dog hugged the puppy and warmed him. The pet came out to greet the baby’s friends. She turned out to be a very kind and intelligent animal. She started licking their hands and giving them a paw. But outwardly the dog looked incredibly exhausted, and her look was sad.

The dog was named Dana, and the baby was named Gavryusha. So they began to live together as a mother and son. Sick, unhappy, useless creatures living near the landfill. Katya could not look at these long-suffering dogs without tears. The girl called the volunteer, and asked to attach the poor dogs before the severe frosts began.

The next day, the dogs were taken to the vet clinic. There the pets charmed everyone. Dana smiled tirelessly, showed the wonders of training, and hugged everyone. 5-month-old Gavryusha communicated with people like a dog and was incredibly affectionate.

The skin disease had to be treated by both dogs. During the treatment, the inseparable couple was taken in by volunteer Svetlana. At that time, she had no other pets. Now the recovered dogs live in a paid zoo. They are actively looking for owners.