The puppy of a resident of Blackpool, Lancashire, UK, during the first walk with the new owners found a treasure trove of ancient gold coins. 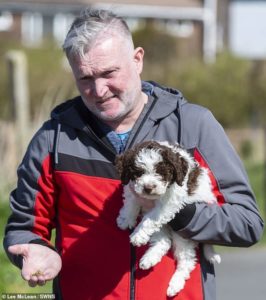 Adam Clark, 51, decided to make a surprise for his nine-year-old daughter Alicia and bought her a Lagotto Romagnolo puppy. This breed is known for its ability to dig and is often used to find truffles.

During the first walk in the field, the puppy suddenly stopped and began desperately digging the ground. It turned out that he smelled 15 gold coins of the XIX century underground.

«I couldn’t believe it,» Clark admitted. 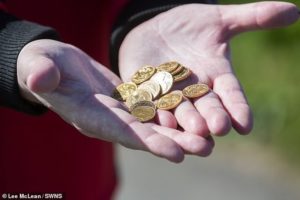 Experts estimated the find at 5,9 thousand pounds. Clark, according to him, admires the treasure, but believes that the real treasure is the dog itself. He calls the dog a «family gold digger.»

LIFE STORIES 0 53 views
The tourists had chosen a quiet place near the river to fish. They managed

ANIMALS 0 54 views
The story happened in the winter. A car stopped outside the medical center, the

ANIMALS 0 55 views
Mason disappeared after hearing an explosion in the middle of a forest fire. His

ANIMALS 0 57 views
A young cat lived on the streets of a city. Although the cat was

Fishermen were fishing when a tiger stealthily emerged from the bushes and carried off the entire catch: video
The tourists had chosen a quiet place near the river to fish. They managed
LIFE STORIES 0 53

The bus driver found a bag on the passenger seat that was rustling
This story happened in London on Christmas Eve. The bus driver was nearing the
ANIMALS 0 170

A blind homeless dog cuddles a puppy that was thrown out of a car
A dog named Sema could not see. Since birth, Sema and his mother had
ANIMALS 0 111

The cat really wanted to find an owner and raised its paw to every passerby
Chloe the cat lived 13 years of her life together with her beloved owner.
ANIMALS 0 101