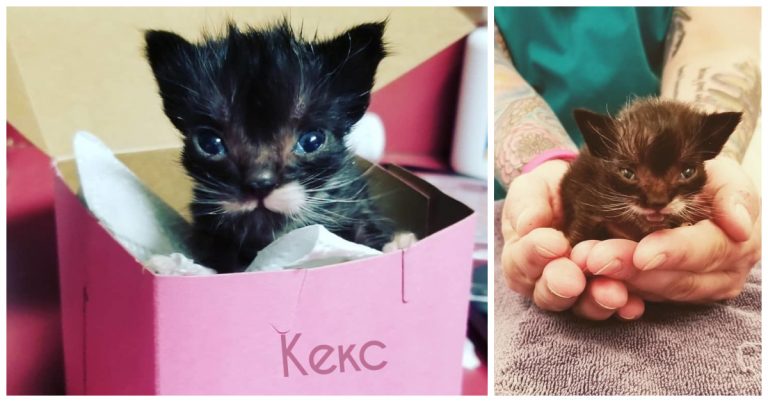 A new unusual patient has been admitted to veterinarian Ellen Karozza from the NOVA Cat animal protection organization. It was a tiny kitten with a white «bow» instead of cheeks (someone calls it a mustache, but personally it seems to us that this is a real bow). 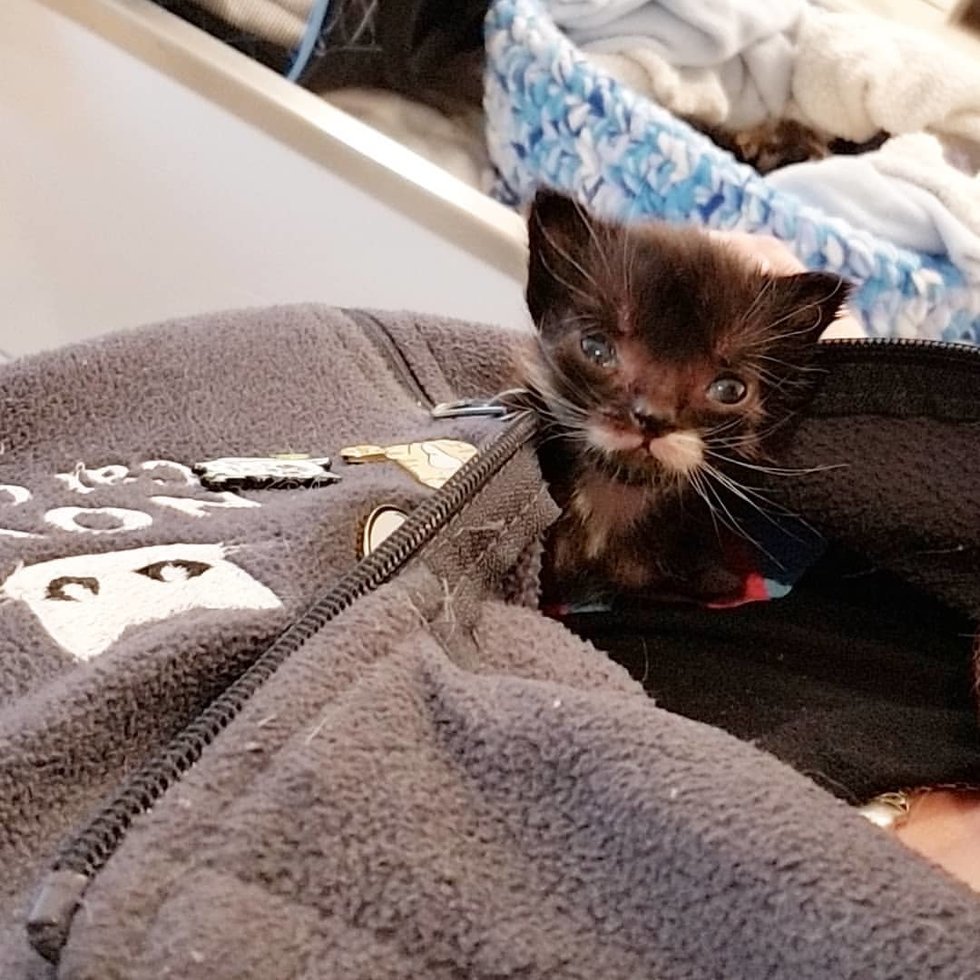 The kid was put in a cupcake box for a joke. And it fit perfectly there! Yes, the crumb was no bigger than a donut or a cupcake with raisins… 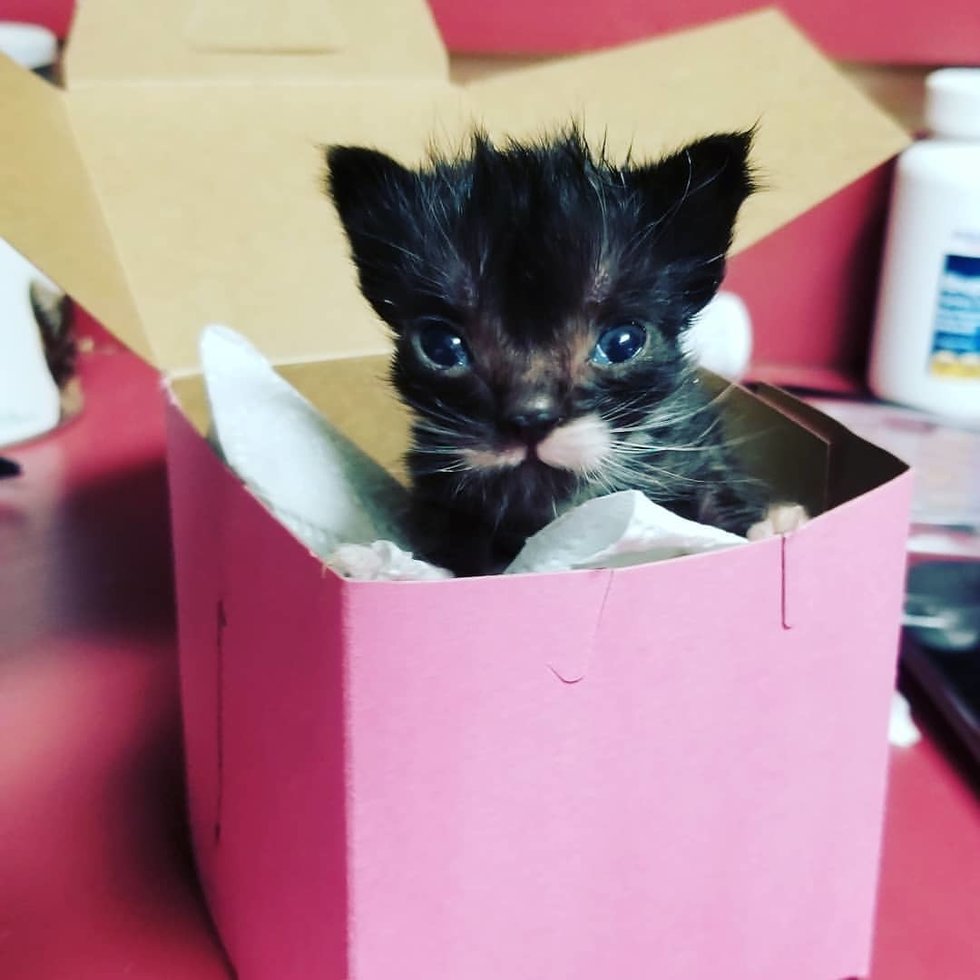 After his birth, the volunteers immediately noticed that the baby was not like his brothers and sisters. A homeless cat mom gave birth to five kittens. But only one of them turned out to be unique! Francis did not grow at all after birth, although he ate very well. 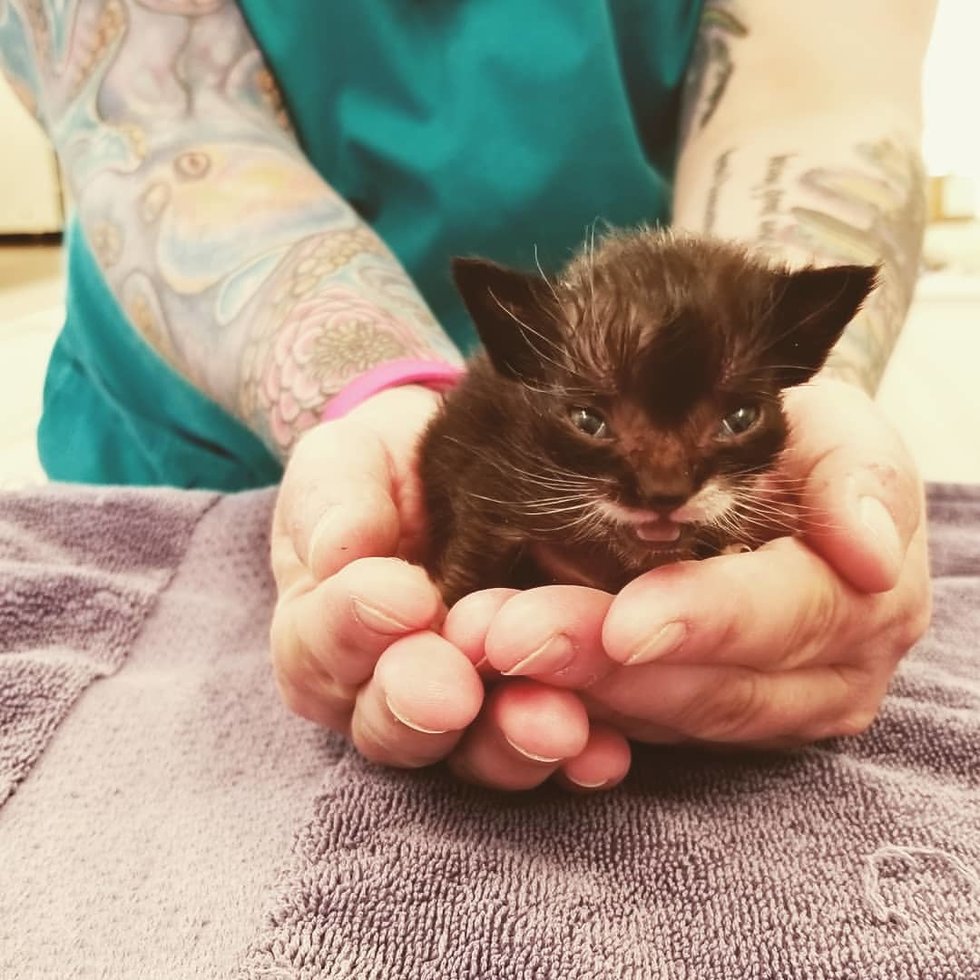 Other cubs were gaining weight. But our hero at the age of 3 weeks barely reached the weight of 100 grams! Look at this photo. Another kitten (striped), who is only 4 days old, weighs more than Francis. 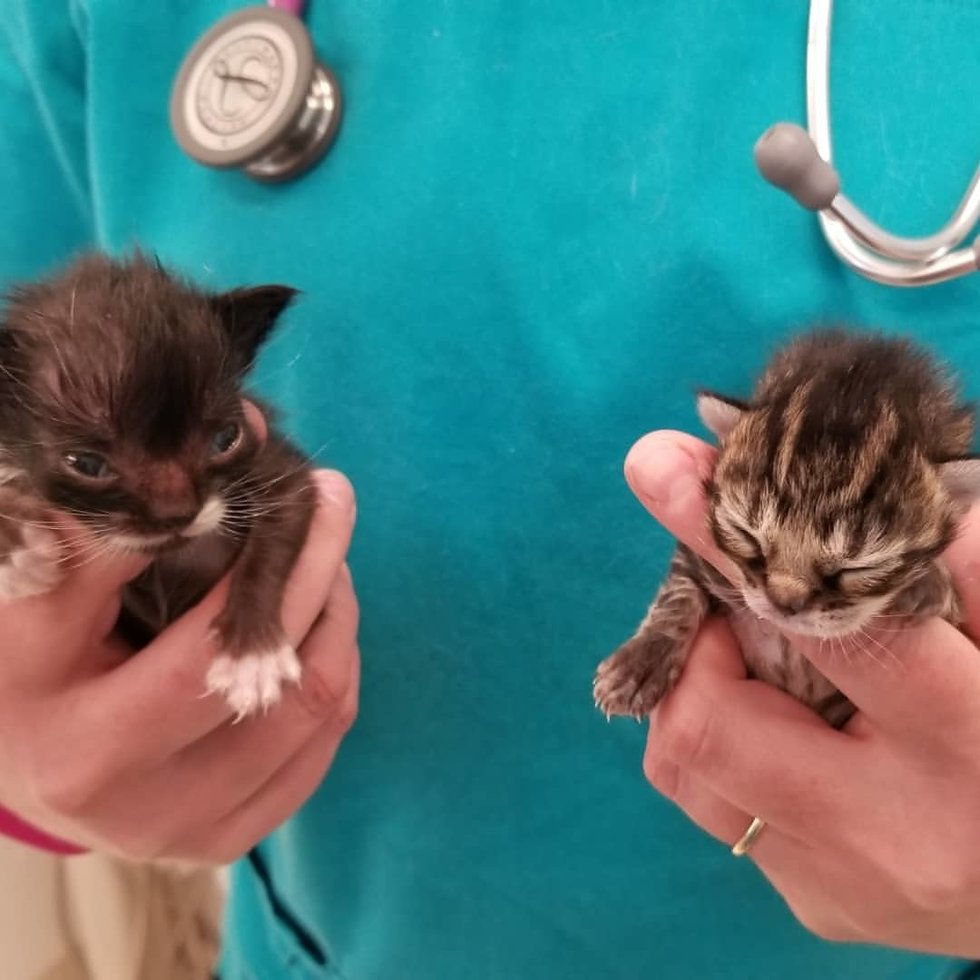 Despite this, the kid tries very hard to imitate the older cats in everything. Running, jumping, playing and even climbing high claws — he learned to do it all perfectly!

However, the kitten’s health raises questions. And now Ellen is doing her best to keep the cat from getting sick. She took him to her home, where she entrusted custody of him to her pet white cat named Benny. 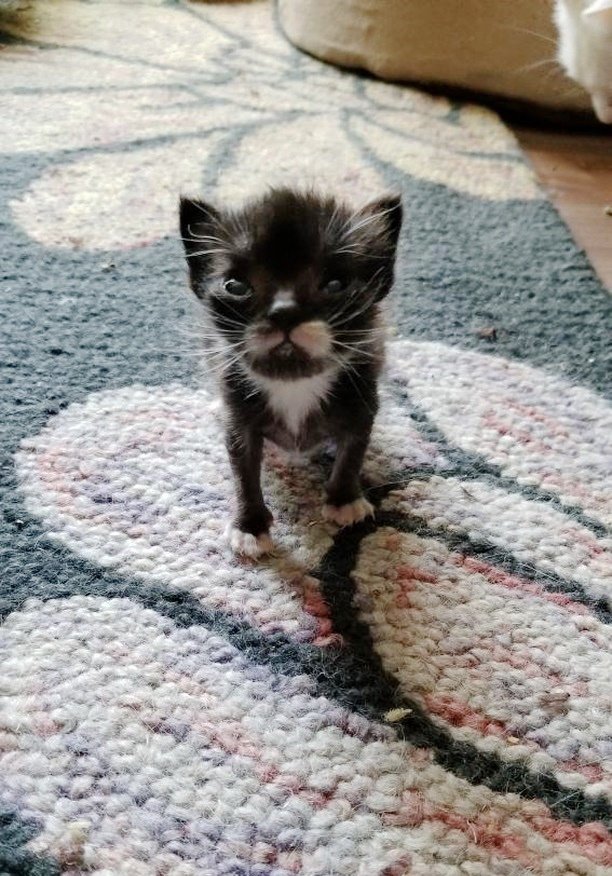 Tests were taken from Francis, which will show why the baby does not gain weight, and why his fur falls out. Problems with the thyroid gland are not excluded. However, the volunteers hope that the diagnosis of «hypothyriosis» will not be confirmed! 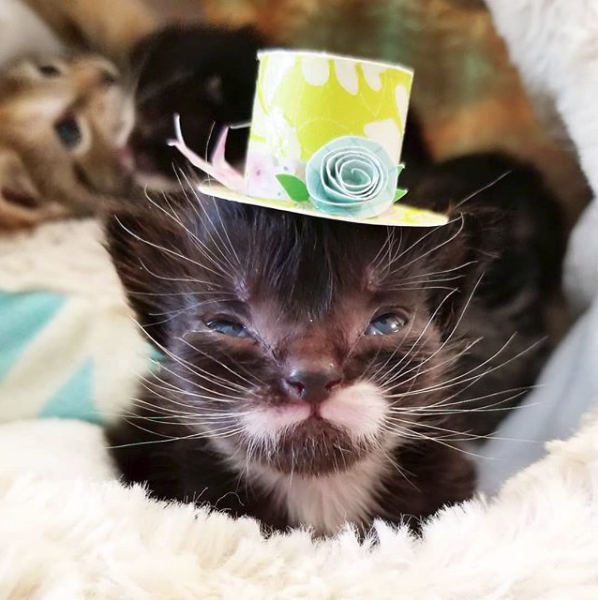 In the meantime, Francis is quite happy with life. He loves his named father Benny very much. And he teaches the baby everyday wisdom! The old cat has raised many generations of kittens. Therefore, taking care of the little black and white gentleman did not become a problem for him. 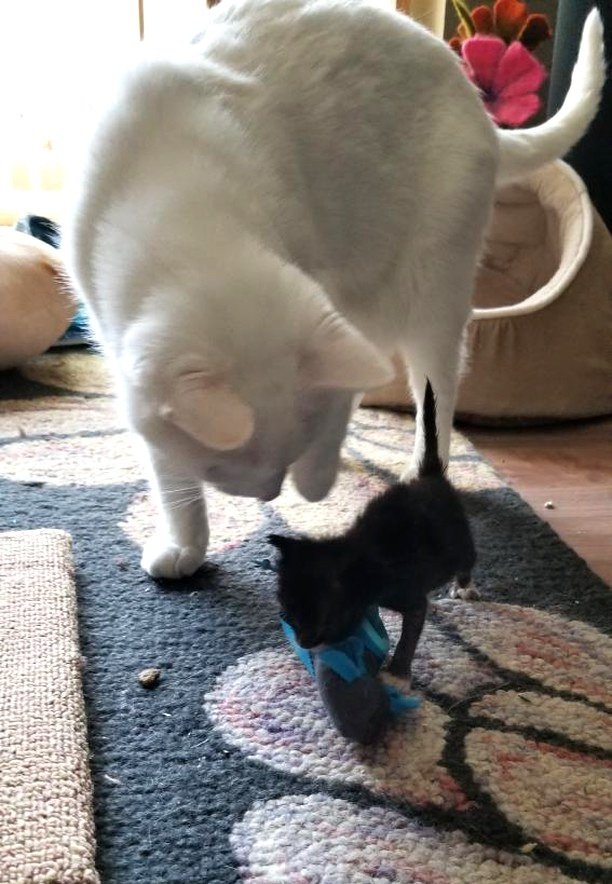 Animals sleep side by side, on the same pillow. when the youngest eats, the «daddy» will always lick his muzzle with his big rough tongue.

Francis is a real fighter. And someday he will become an adult and strong. Even if he has to stay small in size, then for sure he will attract some kind people who will appreciate his unusual! 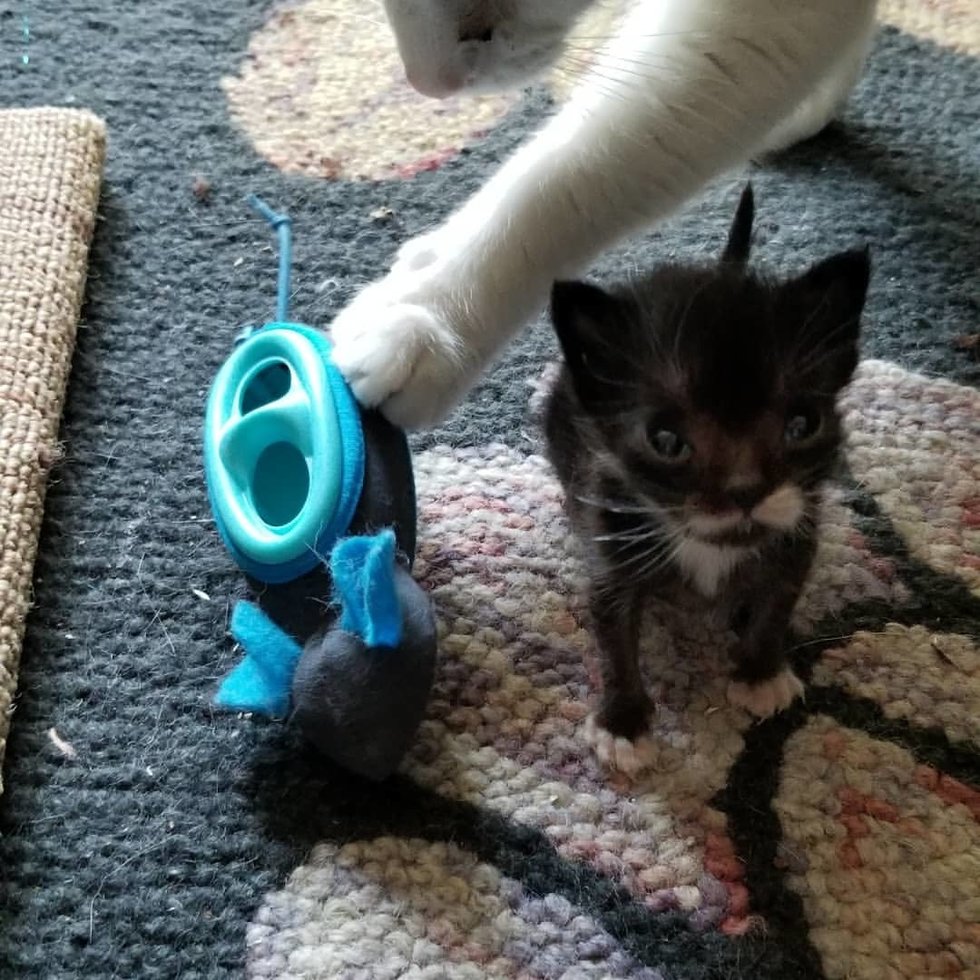 ANIMALS 0 43 views
Six years ago Jay found a little kitten in the street. The animal was

ANIMALS 0 46 views
Chloe the cat lived 13 years of her life together with her beloved owner.

ANIMALS 0 79 views
This story happened in London on Christmas Eve. The bus driver was nearing the

ANIMALS 0 52 views
A dog named Sema could not see. Since birth, Sema and his mother had

ANIMALS 0 121 views
Four years ago, a farmer named Jeff Parmar decided to find out who was

ANIMALS 0 152 views
A couple of fishermen were moving in a motorboat on the river when, out

The bus driver found a bag on the passenger seat that was rustling
This story happened in London on Christmas Eve. The bus driver was nearing the
ANIMALS 0 79

«Sleeping Beauty»: A red-haired street cat made famous by his 20-hour nap
Six years ago Jay found a little kitten in the street. The animal was
ANIMALS 0 43

A blind homeless dog cuddles a puppy that was thrown out of a car
A dog named Sema could not see. Since birth, Sema and his mother had
ANIMALS 0 52