If you saw such a cat somewhere in the woods among the grass, you would think it was a baby cougar or an overgrown marten.

The jaguarundi has the size of an average domestic cat, but is much longer and more pliable. These cats come in brown and bright red, and they used to even be divided into two separate species (jaguarundi and eira cat), but then it was discovered that color is just color, and there can be both gray-brown and bright red kittens in the same litter.

It is interesting that the mini-puma (the puma is the closest relative of the jaguarundi, despite the enormous difference in size) is quite undemanding in food – it eats what is easy to give.
If a lizard runs by, great, if a guinea pig comes by, awesome, and if no one is around, bananas and grapes will do just fine too.

Sometimes in Panama the jaguarundi cooperate with the local monkeys and jointly raid banana and fig plantations: the monkeys pick the fruit from the trees, and the cats pick up whatever has fallen to the ground. 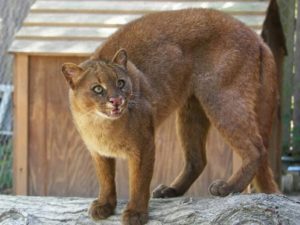 It is not easy to identify jaguarundi by their sound: these animals can produce a wide variety of sounds, from the usual meow and purr, to bird whistles and tweeting.

Unlike most felines, the jaguarundi is a day-living animal and is therefore always surrounded by an abundance of sounds in the wild, so it has gradually adapted to make sounds that are both understandable to its relatives and unmistakable in the background of the forest. 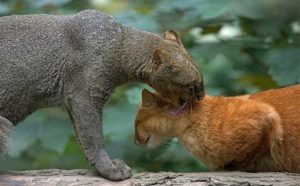 The jaguarundi now lives mostly in South and Central America, although there is also a small population in the southern United States. Jaguarundis are sometimes seen as pets – these cats are easy to tame and great with people. Unless the owners are afraid to keep a mega-active cat that will “hunt” anything that lies out of place all day. 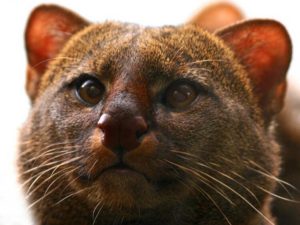 Jaguarundi are of no value to hunters, but their population is in rapid decline in the United States as the forests in which these animals live are disappearing. 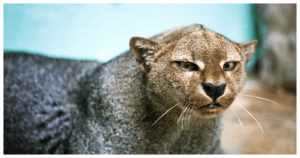 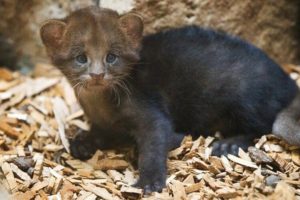