That day, Natalya was late for work, and she returned home after dusk. In her hands, the woman carried grocery packages, so when she approached the entrance, she stopped to find her keys. Opening the door, the woman stepped into the dark hallway. Natalya began to slowly climb the stairs, carefully checking where she was stepping.

Ascending a few stairs, the woman heard a slight rustle, then noticed a pair of eyes that glowed in the dark. Not only Natalya was frightened, but also the owner of bright eyes, who immediately began to walk away, trying to hide. 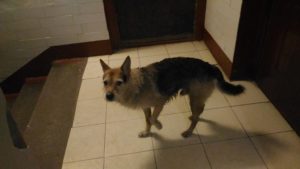 After placing the packages, the woman pulled a flashlight from her bag and lit the landing with it. Around the corner, she saw a stray dog ​​who was curled up in a corner and shaking violently, unable to cope with his fear.

Natalya continued on her way home, and when she got to the apartment, the first thing she did was find a plastic plate and take out some cutlets from the fridge. When the woman appeared, the dog again hid in a corner and started shaking, so the woman put the plate on the floor and herself walked away.

Natalya tried not to move so as not to frighten the dog, but the dog, looking at her in disbelief, nevertheless approached the plate, attracted by the smell of cutlets. The dog greedily eats, but at the same time does not forget to watch the woman to make sure that she does not move.

After eating, the animal again looked at the woman, asking with all its appearance not to drive it out into the street, but to allow it to spend the night in the hallway. Natalya understood the animal’s request, so she slowly turned around and went to the apartment to feed her cats and the dachshund.