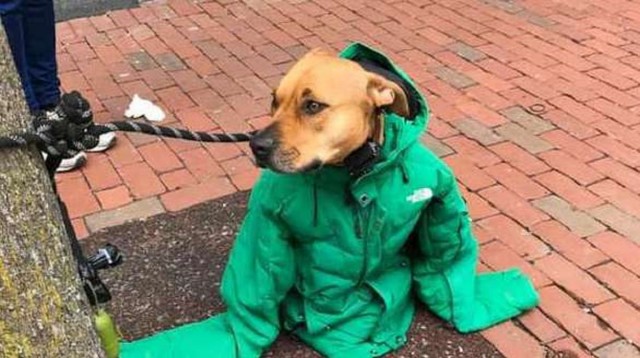 Kristina Holly and her work colleague were waiting for a bus at Harvard Square in Cambridge, Massachusetts. Suddenly, the girls’ gaze stopped on a short-haired dog, which was led on a leash by the owner.
The cute dog happily wagged his tail, stomping after the owner. But then they came to the post office, and the woman read the inscription that it is forbidden to enter with dogsь It was windy and very cold that day. But the owner had no other choice but to leave the dog under the postal service.
She went to the tree and began to tie the pet and the next moment the woman did something that neither Kristina nor her colleague could even imagine!

The owner of the pet suddenly took off her warm jacket and threw it over the dog. To prevent the dog from accidentally throwing off his clothes from his back, the woman buttoned her jacket. After making sure that the thing securely «sits» on the dog, warming it, the owner calmly went to the post office!
The girls who were standing at the bus stop were just shocked!

«It was very cold!» — Kristina recalled later. – «The dog was shaking, and the woman noticed it, so she took off her jacket and put it on the dog!»

When the owner passed by the girl, she said that the owner did just fine! The woman smiled modestly and replied that she did not want her pet to freeze.

After the owner left, Kristina and her colleague began to watch the dog. It was clear that the pet was warm and comfortable. He sat obediently, looking around, and people passing by could not take their eyes off the dog in the jacket!

Kristina admitted that she looked at the dog for a long time, who was waiting for his owner, warming himself in her jacket.

Without a doubt, the dog is lucky that he has such a loving and caring owner!