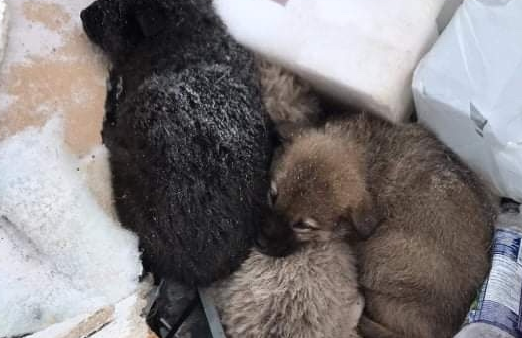 “We received a sad phone call about puppies in a dump today.” That’s how an hours-long rescue of a litter of puppies began for volunteers with Bright Eyes Dog Rescue in Saskatchewan, Canada.

A Kind man spotted the puppies when visiting the dump and called the animal rescue. Volunteers immediately went out to the location and began searching for the pups. Rummaging through garbage in the freezing winter cold, rescuers found three puppies huddled together. Their mother was nowhere to be found, but was most likely a stray dog who didn’t return to them. 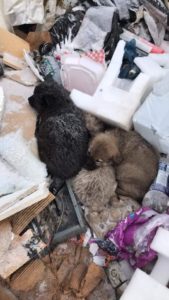 Once the pups were safely they were bathed and fed. They were surprised to find one puppy was actually white, not grey.

Bright Eyes Dog Rescue volunteers returned in the days that followed to ensure they had not left any puppies behind and rescued four more! But it did not prove to be easy.

Two puppies were found in one location and easy to get but the other two were difficult to find and rescue. 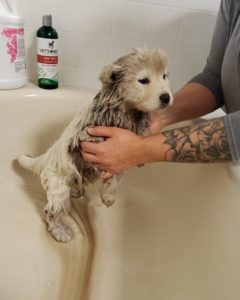 “I know some of our volunteers were out there for a few hours, in the freezing cold, traipsing through tires and garbage and sticks and mud and trees,” Megan Jane, a spokesperson for the volunteer-run rescue told CBC News. She said the puppies had likely never seen a human before and were very frightened, especially without their mother around.

Jane said that the puppies’ thick fur likely kept them alive in the freezing temperatures. The seven-week-old pups appear to be Pyrenees/Shepherd mixes. 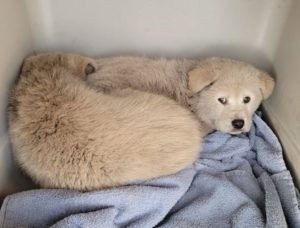 The puppies are now officially in Bright Eyes Dog Rescue’s care. As such they will have a mandatory two-week medical hold before being available for adoption sometime in January. The puppies have also just been named and are getting the treatment.

Bright Eyes Dog Rescue announced, “Dump-dogs no more…meet the Royal Litter!” The pups have been named after the British Royal family so, there’s Queen Elizabeth, Prince William among them. 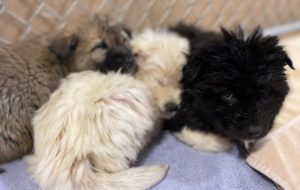 “We will take care of these little puppies until they are ready for adoption in the new year,” wrote BEDR.