A touching photo of a little boy crying uncontrollably in search of his missing dog went viral on the Internet. Fortunately, it helped the little man eventually reunite with his furry friend! 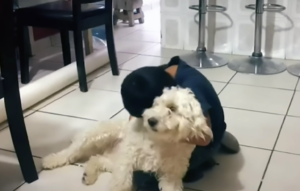 Seven-year-old Jonathan and his puppy, Ryder, were inseparable friends. The boy and his family got the dog from the rescue when he was just a few weeks old. They grew up together, therefore they had a unique bond. So you can imagine how devastated the boy was when Ryder went missing. 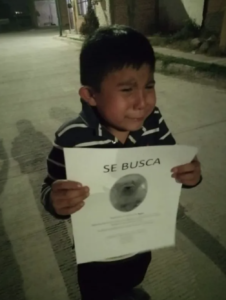 They were walking the streets of San Luis Potosi, Mexico, when the puppy was suddenly lost. Jonathan was devastated and couldn’t stop looking all over the neighborhood for the puppy. Fortunately, his determination and the power of the Internet eventually helped him find Ryder. 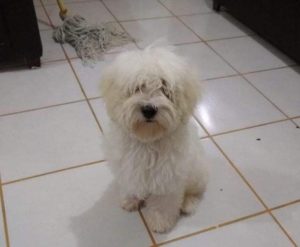 A photo of Jonathan holding a piece of paper with a picture of his dog and the caption “Missing” (translation from Spanish) went viral online after it was shared by an animal protection group.

“This little guy is looking for his friend Ryder,” Adopta una mascota wrote on Twitter.

“He walks the streets and cries, not being able to find him. Don’t be discouraged baby, you will find him.”

“Someone called me. I didn’t ask his name. He said he had my dog. And I asked if we could come see the dog,” said Jonathan’s father, Jose Feliciano Bautista.

“I called my wife and asked if she could go. When she got there, she found our Ryder.” 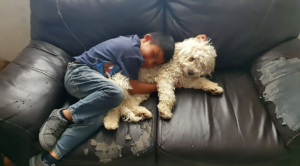 The moment Jonathan and Ryder reunited was so overwhelming for both of them. They just hugged and cuddled together for hours!

“We will always be grateful to all the people who helped us,” Alondra Alfaro, Jonathan’s aunt, wrote on Facebook.

“My nephew is very happy with his dog. Thank you to everyone who helped us by sharing information and to those who helped us look for our dog, even if they didn’t know us.”

LIFE STORIES 0 38 views
Jenny had always been a curvy girl. She was a beautiful woman who enjoyed