A family of farmers raised a small bull in a house. The animal’s mindset eventually changed completely: in the video he not only accepts himself as a dog, but behaves in exactly the same way. 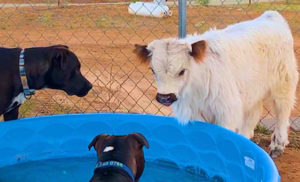 Mello always wants to be close to people. The farmers even had to put a fence around the veranda. But he still somehow gets inside and immediately climbs onto the couch.

When Mello first came to the farm, he was about the size of a dog. The two farm dogs didn’t accept him at first, but then took him into the “pack.” As a result, the bull adopted many of their behavior patterns. 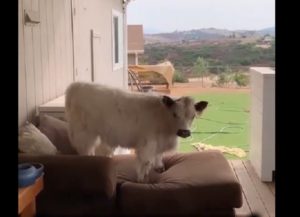 Now he plays with dogs all the time. The owners have already accepted and will continue to raise Mello as an ornamental creature:

The large horned ones are actually quite contactable creatures. They adapt quickly to new environments.