Recently, wildlife photographer Jean-François Largot witnessed the dramatic rescue of a lion cub by its mother in Kenya’s Masai Mara Game Reserve in Africa. When the mom took her eyes off him, the lion cub fell off the edge of a cliff. But luckily he was trapped and did not fall straight to the bottom of the cliff. 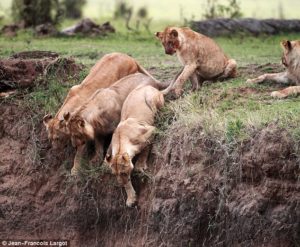 After he was down, he was alone and helpless! He began to call for help. The mother was not far from him, and she quickly arrived with three other lionesses and a male. However, the cub’s fate seemed a foregone conclusion, for a rescue would have put the lion’s life in danger. 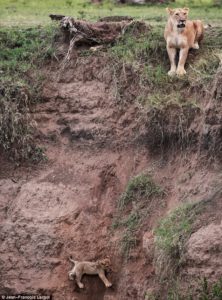 However, motherly instinct kicks in and his mother took quick action to save her little cub. No words can express a mother’s love for her children. The lioness decided to risk her life in an attempt to save the baby. And now the drama begins! 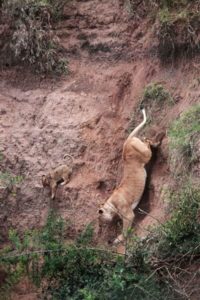 The mother cautiously slides down the cliff and makes her way to her frightened son. She uses her powerful claws to grab onto the crumbling edge of the cliff, working her way down. The moment her tormented child seems about to fall, she reaches him, grabs him with her powerful jaws, and climbs back up to the top. 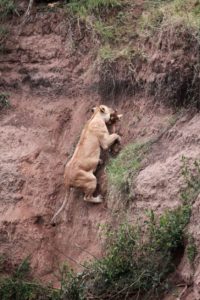 The cub feels he is safe. Аnd it ended up with both the mother and the cub well and unharmed on the solid ground above the cliff.

Finally, everything seems fine and the exhausted heroine of the drama gave her baby a lick to let him know that he is safe! 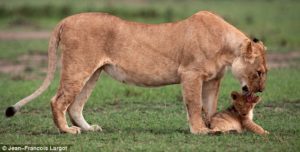