Every evening just before the supermarket closes, the employees collect their carts and prepare to go home. The same thing happened this evening. Except that when one of the employees was putting the carts back, she heard someone whining underneath them. Looking under the carts, the woman saw a small dog. The dog’s fur was covered with dirt. He was disheveled and a little scared.

– You should find another place to sleep, it’s very cold here,” the woman said to the dog, stroking his head. 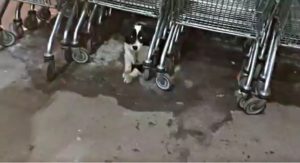 As if he understood what she was talking about, the dog tried to get up, but he could not. It was noticeable that the dog could lean on its front paws, but its back paws did not move at all. The dog looked up at the woman and whimpered again. 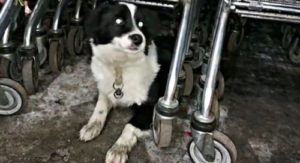 The woman realized that the baby had managed to freeze to the pavement. The woman also noticed that the dog was wearing a collar with a carabiner attached, which means it was very likely that he had escaped by breaking away from the chain. 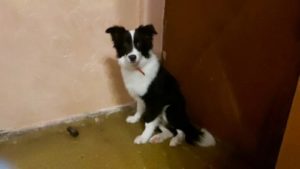 The woman managed to tear the dog off the pavement, but the animal could not stand firmly on its paws and walk away. The woman also could not go home quietly, knowing that the baby would be left out in the cold again and might not survive the cold night. 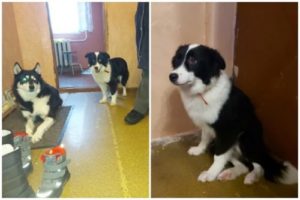 Neither could she take the doggy back to her place. She already had several animals at home who would be against a newcomer to her company. With the help of acquaintances the woman found my number and asked for help. I could hear that she was very worried about the dog, so I just couldn’t refuse her. 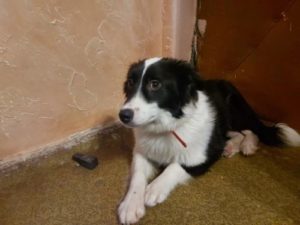 Our volunteers came to pick up the dog. They immediately took him to the vet. When the baby warmed up, he was able to stand on his paws, but as it turned out, one of them was still not working. The vet found other health problems, but they were all correctable. The doctor also determined that the doggie was about 9 months old. He weighs 13 kg, he is small and very cute.