The little puppy crawled away from his mother and found himself completely alone and lost. So he cried loudly in the grass. When Eugenia found him, the puppy was entangled in the grass, which held him tightly, not allowing him to move. The baby made an enormous effort, but could not get out. Feeling a human nearby, the puppy cried even louder. 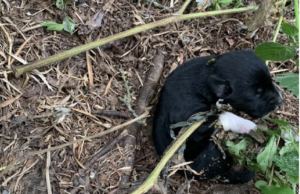 The baby was in a terrible condition. The flies were all over him, in some areas they had already begun to lay eggs and had even managed to hatch larvae. His hind paw was badly injured. Eugenia couldn’t leave the baby, so she took him home, washed and fed him. She didn’t know what to do with the baby next, so she wrote to us asking for help. 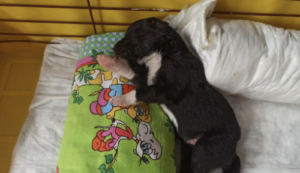 When we found out that the puppy had been in the bushes for two days and had survived, we were very surprised. We asked the girl to take the puppy to the vet and after the examination and treatment the baby, whose name was Chuck, was taken to a holding facility.

To add to all the troubles, lying on the ground, the puppy caught a cold and there was blood in his urine. The puppy’s hind legs were not working. The neurologist attributed this to the fact that the grass had pulled over his torso too much, damaging his nerves. But in time, mobility should be restored. Proper care will be enough for that.

For the first few days, Chuck received several injections a day. But he did not react to them, he did not even wake up when the needle was inserted. After a while, the sensitivity in his paws began to recover. This began to be noticeable by the way the baby would flinch from the injection, and then scream loudly. Over time, he even started trying to crawl away from the person, barely noticing the syringe.

This progress is very encouraging and gives us reason to believe that soon Chuck will start running and his injuries will not even be a memory.