This fish lives at such a depth where very little light penetrates, and as if to compensate for this deficiency, the fish is colored in incredibly bright neon colors.

Realizing that none of them knew anything about this sea creature, the divers carefully caught a few neon fish from the population they found, and when they began to examine them after bringing them to the surface, it turned out to be a new species that had not previously come into the hands of scientists. 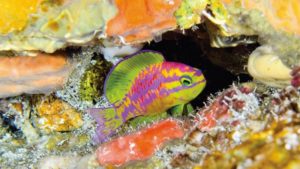 Later it turned out that these fish live only in coral reefs off the coast of Brazil and that only males have a bright neon coloring. The females are an unassuming pale pink color. 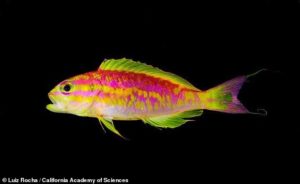 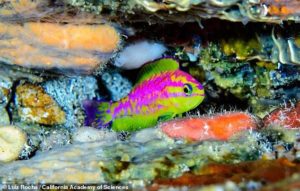 They decided to name the new species after the Greek goddess of love Aphrodite – Tosanoides aphrodite.

“This is one of the most beautiful fish I’ve ever seen,” admits Dr. Luis Rocha, co-director of Hope for Reefs’ reef conservation program, “When we saw it, it struck us so much that we almost stopped paying attention to everything else that was there.”

The divers weren’t even intimidated by the large shark that swam dangerously close to them as they tried to catch these fish.

“The fish in this twilight zone are mostly pink or reddish in color. The point is that in such darkness, this color allows the fish to be even less visible to predators. Red color is clearly visible only when light falls on it.

This is why the yellowish-pinkish-lilac fish surprised the researchers so much.