Onagadori (“noble chicken” in Japanese) is a rare breed of chicken known for its extremely long tail, which can be up to 10 meters long, putting even peacocks to shame.

Of the 17 chicken breeds considered to be Japan’s national heritage, the Onagadori is the only one with “special” status. Since it obtained this status in 1952, export of Onagadori chickens and eggs has been banned. Therefore, very few, if any, individuals can be found outside of Japan. This breed is famous for its non-shedding and therefore incredibly long tails in roosters, which, when kept under the best conditions with high animal husbandry, can grow throughout the bird’s life. 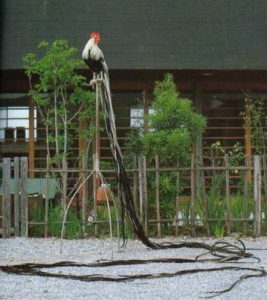 The history of long-tailed hens goes back thousands of years, but the Onagadori breed is thought to have been bred in the 17th century in the Japanese province of Tosa on Shikoku Island. Its exact origin remains unknown. But experts believe it is descended from other long-tailed breeds, such as Shokoku, Totenko and possibly Minohiki. 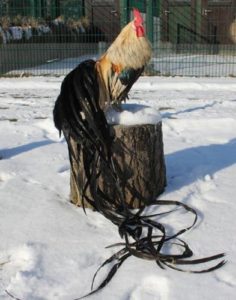 Onagadori roosters owe their tails to a mutation in the “nm” (“non-shedding”) gene, which allows them to always have their own tail feathers, as well as the “gt” and “sg” genes, which cause the exact same feathers to grow quickly. 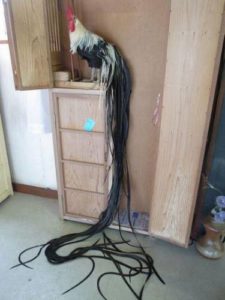 Interestingly, Onagadori hens usually molt, while roosters never shed their tail feathers, but the rest of their plumage is shed every 3 years. In fact, this was one of the reasons why this chicken breed was initially disliked by European breeders, because it meant that the birds would keep their shabby and damaged feathers for a long time instead of constantly renewing them. 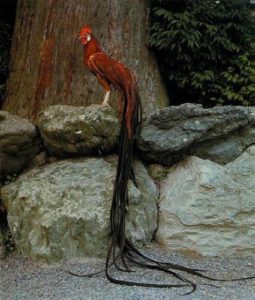 Because the Onagadori breed also had problems adapting to the European climate and environment, breeders began crossing them with local breeds to preserve some of the Onagadori genetics, creating new, more stable bird breeds. This is how the German Phoenix breed was born. It is very similar to the Onagadori, but molts more often than the Japanese bird. 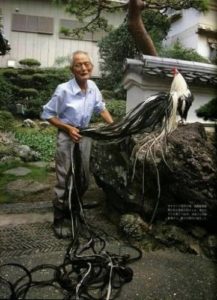 To be considered a purebred Onagadori, a rooster must have a tail at least 1.5 m long. Considering that under normal conditions onagadori tail feathers can grow 90 cm per year, roosters with tails several meters long are very common. The current record is 11.3 meters.

In addition to tail length, onagadori roosters are also graded according to “kawari honke”. This is a special type of feathers in their tails, the widest of them all. The number of such feathers can vary from 1 to 4, so if a bird has all four kawari-honke feathers, it is highly sought after among breeders, hence worth a lot of money.

The Onagadori breed is currently listed as an endangered species, with a total of about 250 birds kept by 250 breeders. One of the reasons for this may be the poor egg laying rate (about 25 eggs per year).