In a very emotional scene, a man was surprisingly reunited with his lost dog. For more than three years, the owner kept looking for his furry friend and never lost hope of finding him. Fortunately, luck smiled on him, and the couple was finally reunited! It’s devastating to lose a pet. Not knowing where they are or if they’re ok or out there hurting somewhere.

Giorgi Berejiani’s beloved dog, Jorge, went missing from their home. And despite the owner’s hard efforts to find him, he looked like he vanished. Days turned into weeks and weeks into month, and there was now way of Jorge. But Giorgi never lost hope and he kept looking for his friend.

But the months turned into a year and a reunion didn’t appear to be in the cards for the pair. For three years, Georgi did not stop looking for Jorge, posting flyers all over the streets.

“We’ve been looking for him for three years,” Berejiani shared

In October, workers at a local business who had learned of Jorge’s search spotted a dog that looked just like him. The only thing that made this dog different was that the city officials had attached a yellow tag to his ear, a mechanism for marking stray animals. 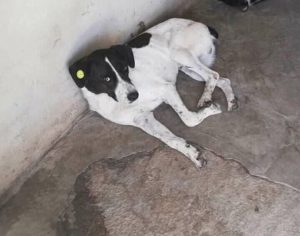 When a worker from called Giorgi to let him know he spotted a dog that matched Jorge’s description, the man immediately rushed there, hoping to be true.While he was on the bus, he first caught a glimpse of the dog and knew it was Jorge. Thankfully, the man was right! As he approached a tree the dog was dejectedly sleeping beneath, he turned on his camera.

Then he called the pup’s name – and Jorge recognized some combination of his name and the voice calling it. He picked up his head in confusion – then he turned his head.

A very sweet moment ensued when the two recognized one another. Frankly, the clip (which shaky and blurry in places) is a real tear-jerker.Jorge jumped with joy, even looking for a moment like he was smiling as he jumped up on his old owner and showered him with love. “We searched for three years,” said the 62-year-old man. “Then we found him!”