The dog lived on the street and ran between yards looking for food. Many yards had people who were sympathetic to the dog. In one courtyard they left her food and water, and in another courtyard they took an old chair outside for her so she could sleep at night not on the cold concrete. 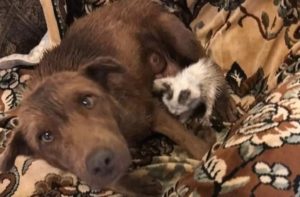 After a while the dog became pregnant, but, unfortunately, her babies did not survive. The dog took the loss hard. Then she went running around the city, and at the end of that day she brought with her a little kitten. After getting into an armchair with him, the dog began to feed the baby.

The kitten looked about a month old. It was hungry, dirty and did not understand what was happening. The dog adopted the baby. Not only did she feed it, but she also carefully licked it and warmed it up at night. 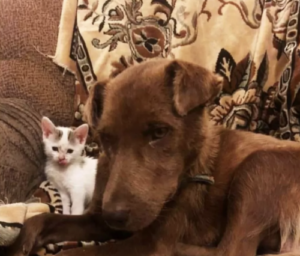 The locals were very surprised by the dog’s affection for the cat. After all, everyone is used to the fact that these animals are enemies.

The unusual couple attracted the attention of many. It helped them find their home. Both animals were taken by the same family. Together they live in their home and enjoy the love and care they receive from people.