Robin Strader of Norman, Oklahoma, was driving to work when she noticed something very unusual in the middle of the busy highway she was driving on. A frightened donkey was wandering down the road. The woman immediately stopped the car and jumped out to help the frightened animal. She immediately called the authorities.

Soon Officer Kyle Canaan of the Norman Police Department arrived on the scene. Meanwhile, Robin managed to get the donkey out of the way. 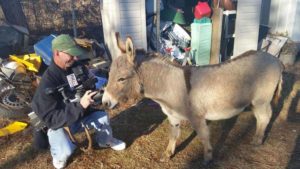 Canaan didn’t know what to do at first. The woman offered to leave the donkey, which they called Squishy, at her house a few kilometers away. However, since it would have taken too long to deliver a suitable vehicle, Canaan decided to take Squishy in his own car. Squishy gladly accepted the invitation.

The donkey climbed easily into the back seat of the patrol car, a place usually reserved for criminals. 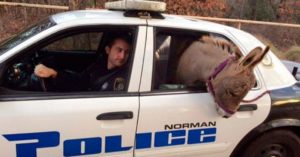 In fact, they got along very well with each other and had fun on the road.

Most importantly, Canaan got his four-legged passenger safely home to Robin. He even expressed interest in adopting him if no one else wanted him.