In Rome, a police team encountered a heartbreaking scene. A dog had been abandoned and left tied to an electric post in the blazing sun. The beautiful and sweet abandoned dog’s name was Maggie. The poor dog suffered from the heat, which she endured there for a long time.

The story was shared by the Rome police on Facebook . They said the one-year-old dog was tied to a pole under direct sunlight when officers at the San Giovanni police station, led by Mauro Baroni, noticed his presence.

Poor Maggie couldn’t move around freely and looked very exhausted from the heat. 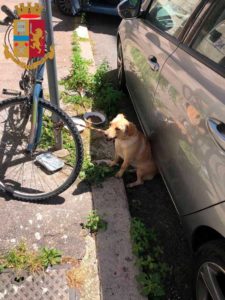 The officers untied her and gave her water and food to help her recover. The abandoned dog was then taken to a municipal kennel, where it was confirmed that she did not have an identification chip. And she remained there while they searched for her owners. 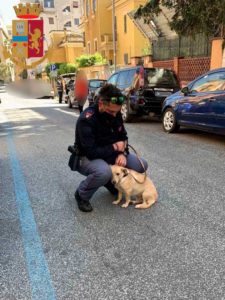 Despite all their attempts, Maggie’s family cannot be found. But then one of the agents who used to visit the dog in the kennel becomes so attached to her that he decides to adopt her and give her a loving home.

Michelle, a police deputy, is the new father of an adorable doggie. Maggie now makes frequent visits to the police station with her father.

For Maggie, the story ends safely. And now she has a big family and a loving father who will always look out for her. It even inspired the officers, who rescued four more street puppies, and organized an “Always Together #iononliabbandono” campaign in support of street animals.