Gabi’s story is very sad. We found this dog in a cage at the trap. It was -50 degrees Celsius outside. At the same time the dog with the short hair was sitting outside. Gabi had frostbite. She was exhausted, and on addition to all that, she was expecting babies. 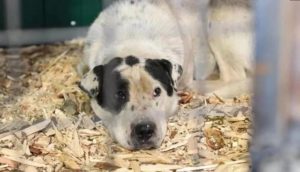 We managed to pick her up in time, otherwise her fate would have been unenviable: an agonizing starvation death in the freezing cold. Gabi did not come out of the capture cage, but crawled out. She was shaking not only from hunger and fatigue, but also from fear. 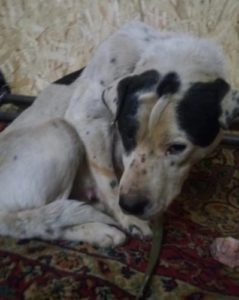 For several days the dog had been trying to get warm. She slept all the time, buried in a blanket. And attempts to take her outside were met with a loud scream. Gaby was afraid to be in a cage on the street again. So she flatly refused to leave the room. 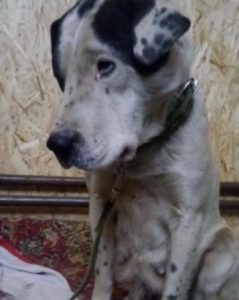 Gabi was not taken to be sterilized. Her exhaustion and anemia would not allow her to withstand the anesthesia. The dog gave birth a couple of days later. But all but one of the puppies were dead. The last baby of the litter didn’t live a day.

Gabi gained weight and gained strength at the holding center. She is quite ready to fly. To leave her there means to condemn her to death. After all, she will either become homeless again and die from the cold, or she will be taken to a captivity center, where people will kill her.