Memphis Rose survived a serious car accident that left her bedridden.
Volunteers of the charitable foundation decided to give the child some joy. 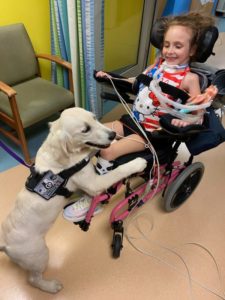 Along with her grandmother and uncle, 6-year-old Memphis Rose was driving home when her car was involved in an accident.
She suffered multiple injuries, a fractured spine, and cardiac arrest. Miraculously, doctors were able to save her. But the child remained paralyzed. When Memphis opened her eyes in the hospital, she was frightened because she was on a ventilator and could not feel her body.
In addition, the girl’s uncle was killed in the crash and her grandmother was injured. The girl was in an atmosphere of grief and depression.

A local charity, Chasin A Dream, decided to help Memphis. They contacted the family to find out what she liked. It turned out that she loves dogs.
For the first time in weeks, doctors and parents saw Memphis smile when they brought her a puppy named Juliette.
The dog made the child forget about the pain, the loss of loved ones and the accident, if only for a while. 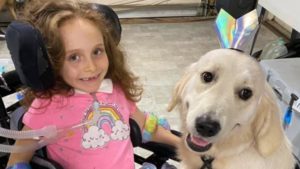 While Memphis Rose has a long road ahead of her and may never recover from her spinal injury, her mother Gayrene Meade is in awe of her. “She always has a smile on her face. Memphis Rose impresses me every single day with her strength.”

And with her best friend Juliet by her side, Memphis Rose will have the companionship and love she needs to learn to live independently. “You could not ask for a better team than these two,” Earhart says.