A dog named Annie was 3 years old when a family found her hiding in the backyard on a hot summer day. They didn’t know how long she had been there, but she was very emaciated.

“She was in really bad shape. I really don’t think she would have survived much longer,” said Ms. Donna Lochmann, an employee of Stray Rescue of St. Louis. 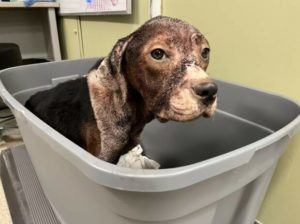 Fortunately, the family called for help just in time. Mrs. Lochmann was the first to come to the rescue, carefully put the dog in her car and called the veterinary team at the shelter to inform them about Annie’s condition.

The plan was to give Annie a thorough cleaning after her arrival at the shelter. After the bath, the team quickly discovered that Annie could not get up. They gave her water. But when she still didn’t get stronger, the team decided to send her to an emergency center to get a blood transfusion. 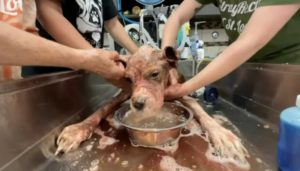 When Annie returned after the procedure, the sick dog had to spend most of her time in an oxygen chamber to strengthen her lungs, which were severely damaged by anemia.

But the shelter staff was by her side every step of the way. When she wasn’t in the oxygen chamber, the team would take her outside and sit with her in the sun. 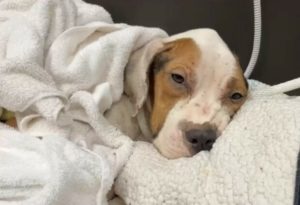 Slowly, Annie got stronger and stronger. When her lungs were finally healthy enough, she was moved from the clinic to the shelter where she could be with other animals.

Annie was placed in a foster home soon after she left the clinic. And although she has not yet been adopted, Ms. Lochmann is happy to report that she is doing well. 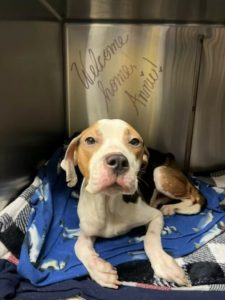