When traveling, many factors must be taken into consideration to ensure that our stay in a country is a pleasant one. We need to respect the rules in place and not think that, as tourists, we can do anything. The protagonist of this story went a little beyond what was allowed, driven by the desire to take an unforgettable picture.

Visiting London at the royal palace, the tourist in question took the liberty of touching the reins of a royal guard’s horse. The horse was not exactly happy about the gesture, and neither was its rider, who, annoyed by the woman’s audacity, ordered her to move away and not to touch the animal. Let’s look in detail at what happened. 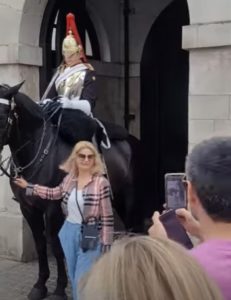 During a vacation in London, the protagonist of the story was, as with all tourists in this city, visiting Buckingham Palace. There, spellbound by the royalty of the Queen’s guards, the woman approached a uniformed man on horseback and posed for a souvenir photo. So far, so normal. Before her, many others did the same thing, but no one tried to touch the horse.

Tourists taking pictures before her actually kept a safe distance and, as soon as the moment was immortalized, left, leaving room for the rest. Instead, in addition to positioning herself beside the horse, she reached out to grab the reins to be immortalized in an original photo. Too bad neither the horse, nor the rider, liked this, and video footage is proof. 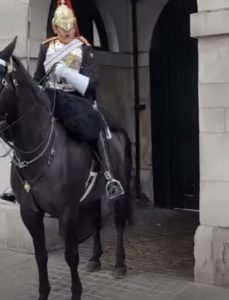 In the clip you can see the animal, which, feeling pulled and perhaps a little irritated, starts to move, while the guard hesitates for a few seconds before shouting at the woman, “stand back and don’t touch the reins.” Words that make the tourist jump and walk away instantly.

“I will never go back to London again” – reads the caption of the video posting.

Writing and sharing is the woman’s stepson, who, disappointed with the behavior of the guard, vowed never to return to the city. Immediately viralizing on the web, it turned out that many people agreed with the royal guard.

For many users, the man’s reaction was perfectly normal, because he was not there to be photographed, but was working.

“He was not at Disneyland, the guard was on working hours”; “are you talking about attacks? I would have yelled even louder. They were on duty” – and so on with many other comments that show total disagreement with the tourist’s actions.