The cat named Flossie was born on December 19, 1995. This is what the data in the veterinary books say. In December 2022, she will be 27 years old. Unbelievable, but if you translate these figures to human age, you get as much as 120 years.

The tricolor cat is already feeling her old age in full measure – she cannot see or hear much. Nevertheless, Flossie remains as playful and affectionate with people.

According to her owner, the cat is peaceful and loves to cuddle and eat good food. Flossie is still playful and curious, she quickly adapts to new surroundings, despite her poor eyesight. 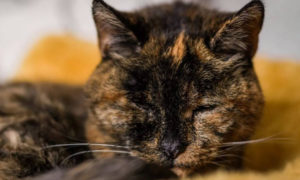 “We were amazed when we saw that Flossie’s veterinary records indicated she was 27 years old,” said Cats Protection Chapter Coordinator Naomi Rosling, “she’s the oldest cat I’ve ever met.”

Homeless after 26 years in the family

In 2022, Flossie had the ordeal of being homeless after 26 years of happiness. Her owner died.
Since most cat owners prefer to take younger animals from shelters, Flossie seemed doomed to stay at Cats Protection. However, she was lucky and soon found a new home.

Flossie’s story begins in December 1995 when she was taken home by a Merseyside hospital worker. At the time, she was just a little kitten and was wandering near the hospital. The medics took pity on the kittens, who were only a few months old at the time, and decided to take one for themselves. 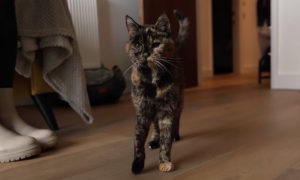 After living the first few months of her life as a feral cat, Flossie eventually found herself surrounded by love, warm food, and toys. She lived with her owner until he passed away 10 years later.
Unfortunately, after 14 years in her new home, Flossie ended up homeless again – her second owner also died. She was 24 years old at the time. Fortunately, the son of the previous owner took her in. For the next two years, Flossie lived with him.

Sometimes, however, hard choices have to be made. Flossie’s new owner was elderly and because of health problems he had to entrust the cat to volunteers from Cats Protection in Tunbridge Wells.

“It wasn’t an easy decision,” says Naomi Rosling of Cats Protection. “He came to us for help; it was in Flossie’s best interest.”

Responsible cat ownership is when someone thinks about an animal’s needs more than their own feelings. 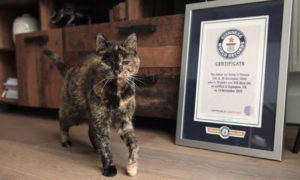 That’s when Flossie met Vicki Green. The girl has a lot of experience taking care of elderly cats, yet she had no idea that she would be welcoming a record-breaker into her home.

“The first few nights she was noisy because she couldn’t see in the dark and was a little confused by her new surroundings, but now she sleeps peacefully snuggled up against me. I knew from the beginning that Flossie was a special cat, but I never imagined sharing my home with a world-record holder,” says Vicki Green.

“To have an elderly cat in your home is a blessing.”

Vicki hopes Flossie’s story will encourage potential cat owners to take older animals out of the shelter. The girl believes that even an older animal can bring happiness to its owner. 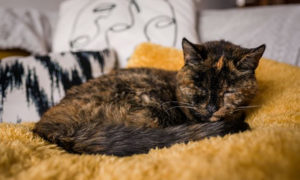 According to records, the longest life was lived by a cat named Cream-Puff from Texas. He passed away at the age of 38 years and 3 days.