Everyone knows that cats are afraid of water and avoid it in every possible way. This truth is also well known to the Dutch, who, noticing a cat swimming in a canal, rush into the water to help the animal. Then, compassionate bystanders call an animal rescue service and ask them to send a veterinarian to help the cat, except that the response they most often get is rejected:

“We won’t take the cat and take it to the vet. He shouldn’t have been rescued. The cat’s name is Kis and he loves water and just took a bath in the canal,” operators, who are already accustomed to receiving such calls, answered. 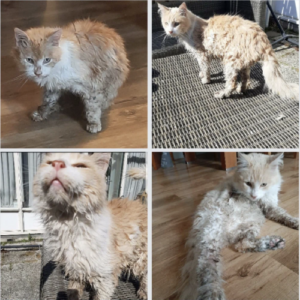 Kis is a big cat weighing 7 kilograms. The cat likes to bathe in canals and then roll around in the mud. Since the cat has long hair, you can only imagine what he looks like after his unusual “procedures.

More often than not, when people notice a cat in the water or on the street when he’s covered in mud coming home, passersby decide that he needs help. People catch Kitty and then call pet rescuers and ask for help. To the surprise of kind passersby who decide to help the cat, the special services refuse to come and pick him up.

“We ask you not to rescue this cat!!! He’s doing fine, he loves both water and dirt. There is no need to feed Kis either. The cat has an owner who makes sure he has a proper and balanced diet. Feeding him on the street will only provoke health problems for him.”

Under the text, a picture of Kitty was posted to show what this cat might look like when he indulges in his favorite pastimes.