A young woman named Danielle Bellengee was a champion runner, and every morning she went for a run to keep in shape. She was accompanied by a faithful dog named Tez, whom she had once adopted from a shelter and never parted with again. Tez was a cross between a mutt and an Australian Shepherd dog, a shepherd dog, so he had a love for long walks and long-distance running. One of Danielle’s routes was a trail through a canyon in Moab Desert, Utah. Such a run lasted 1.5 hours and went through a secluded and quiet place with hills and mountains.

One day, Danielle and Tez drove to the canyon. She left her car and phone in the parking lot, taking only a bottle of water, energy bars, and ibuprofen pills, and ran up the trail.

As the girl began to climb the mountain an hour after the workout began, she slipped and rolled down to the bottom of the hill. The woman hit the rocks several times and was unable to move her legs. As it would later turn out, Danielle suffered serious fractures and internal injuries. But then she was alone, scared out of her mind. Only Tez was fussing around, not knowing how to help her owner. 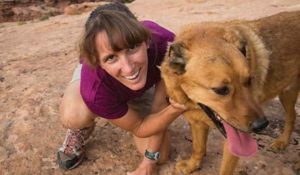 The girl spent more than 50 hours in the desert. She tried not to think about the pain, drank from a small spring and rejoiced when her dog warmed her on cold nights. During the day, Tez was running off somewhere. It turned out that the faithful dog had traveled several miles to get back to the road and call people for help, but cars were passing by.

That’s when Danielle’s neighbor noticed that the girl was long gone and started sounding the alarm. Calling rescue workers, the athlete was reported missing. Fortunately, a police officer found the girl’s parked car near the canyon trail and directed a search party down the trail. 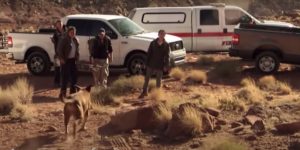 When the rescuers were ready to set off, a joyful Tez came running toward them and led the men straight to his injured owner. The story ended well, and Danielle was able to get back on her feet after some time of treatment. By her example, the girl inspired people that even in the worst troubles one should not give up. In addition, she was eternally grateful to her faithful friend Tez. 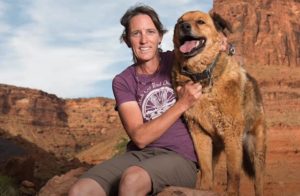 ANIMALS 0 35 views
Friendship between a cat and a dog is not uncommon today. Owners who love

ANIMALS 0 29 views
It is unknown what happened to the mother of these six puppies, but they

LIFE STORIES 0 60 views
A widower and father of three children, Arthur hoped every time he put on

ANIMALS 0 51 views
The weather outside that day was cold and rainy. One of the residents of

No one wants to take the three-legged dog. So she lives alone in an empty apartment
Residents of the house noticed that a dog without one paw had appeared in
ANIMALS 0 42

A janitor rescues a dog just after he is fired. The next day, he receives an offer to run a large company
A widower and father of three children, Arthur hoped every time he put on
LIFE STORIES 0 60

The dog that Alain Delon saved from body burns died. He helped him live longer
A dog named Mambo nearly lost his life in 2009 in the most horrific
CELEBRITIES 0 49

A priest built a 10-story tree house with his own hands. It looks great!
The construction of this amazing house began back in 1993 in the United States,
POSITIVE 0 9

Police responded to a call from an elderly man begging to come to his home on his 101st birthday
Frank, 101, was sitting at his desk, looking at the cake he had bought
LIFE STORIES 0 47