Treating homeless animals requires a lot of money, which not everyone who wants to help has. Shelters are also scarce. While animals are abandoned more and more often, volunteers are sometimes simply powerless.

A 5 week old cat was brought to a shelter in Las Vegas. The staff immediately determined that the animal only has a week to find new owners or it will have to be put to sleep. The shelter had no money for the care and treatment of the baby, and judging by her appearance, she needed treatment the most.

The cat had almost no chance of survival, but luck smiled on her. Nikki Martinez, who often rescued the most hopeless animals, came to the shelter. Seeing a poor bald cat in one of the cages, the girl immediately went to her. Noticing the person who paid attention to her, the little one began to meow weakly. At that moment Nikki decided to try to help her. 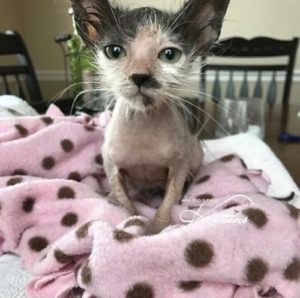 Almost immediately it turned out that Nikki’s job was not an easy one. Bunny, as the girl called her cat, was diagnosed with ringworm. The vet prescribed expensive medications. But they did not give any result. The animal’s body rejected the medication. Therefore, the cat felt worse day by day.

After a few days of treatment, Bunny began to refuse to eat. She began to lose weight, which was already critically low. The remnants of her hair fell out, leaving the cat completely bald. Nikki fought daily for her ward’s life, but she wasn’t entirely sure she could win the battle. 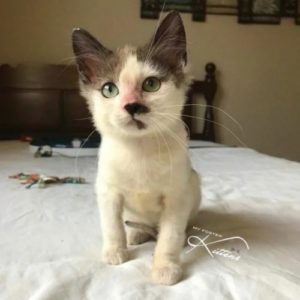 The woman and her husband began giving Bunny special supplements. The animal only agreed to eat them with a syringe. Very slowly the cat’s condition began to stabilize. A month of syringe feeding yielded results and the cat regained its appetite. Bunny gradually began to eat food on her own and put on weight.

Nikki tried several remedies for the pet’s coat. Some of them proved to be very effective. And Bunny’s body began to reappear with a thick and shiny coat.

The girl says that despite all the difficulties in treating the cat, the most difficult moment for her was when she had to say goodbye to Bunny. After so much effort and worry for the cat, Nikki had grown very fond of her. But she understood that now her pet needed her own home and loving owners. 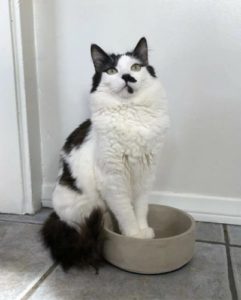 A family has been found for Bunny. And Nikki continues to follow her former ward from a distance, corresponding with her new owners and rejoicing at the photos she received from them, which show that the cat has become a real beauty.