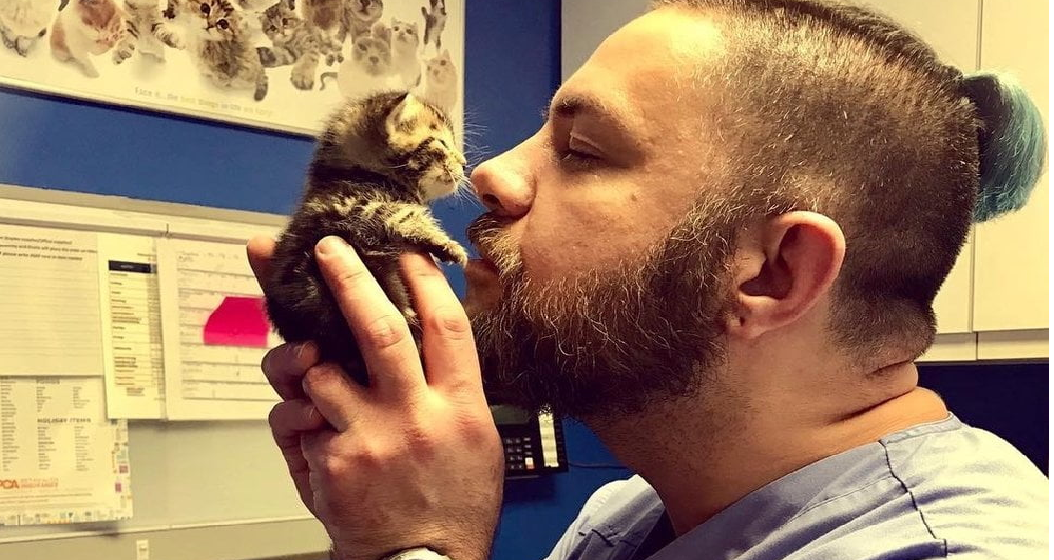 Three small kittens found on the street after a thunderstorm were brought to a New York City vet. The cubs were very young and in dire need of a mother’s care. 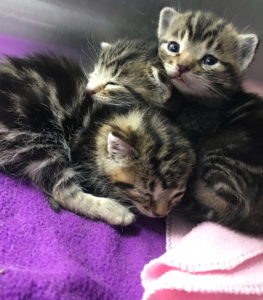 They were found right in the middle of the street, with the lifeless bodies of four other babies of the brood lying beside them.

“Apparently they had drowned the night before when the storm was raging. The surviving kittens were only two weeks old,” says Gil Nunez, a veterinarian.

“They arrived at the hospital in terrible condition: dehydrated, emaciated, with watery eyes and a runny nose. On top of that, they were soaking wet and shivering.”

Gil volunteered to care for the new patients.

He filled a bottle with milk replacer and played the role of a model dad as much as possible. The kittens began to eat greedily.

“It’s moments like this that make me really happy, because I save lives. These kittens will never be hungry, cold, or thirsty again!” 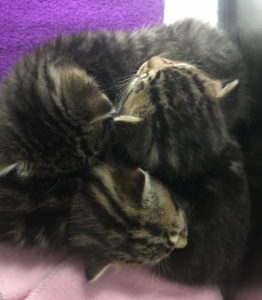 The orphans had names: Donatella, Gianni, and Santo.

Gil spent the first night with the kittens, feeding them and keeping them warm on his chest. As a result, energy began to appear in the frail bodies. 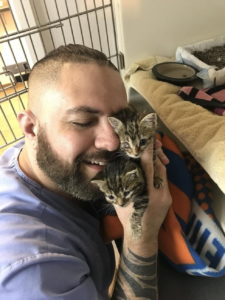 But the respiratory illnesses, unfortunately, progressed. Two of the babies had to be admitted to the intensive care unit.

Despite the doctors’ best efforts, Gianni died after five days of treatment.

“Donatella, the only girl, managed to get better. And Santo, the youngest, proved that he was also the strongest,” Gil says.

More than two weeks later, Gil continued to feed the two surviving kittens, and they became very attached to him. 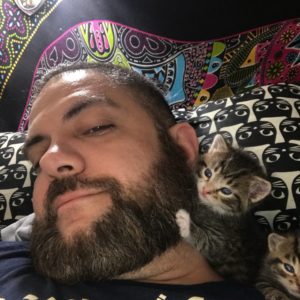 “They respond to my voice even if I’m in another room. They love to sleep on my chest and hide their little heads under my chin.

Despite his wild lack of sleep, Gil never once broke his feeding schedule. He knew the helpless furry lumps were counting on his support and wanted to live.

“I was tired as hell, but I managed to love these babies,” the vet adds. 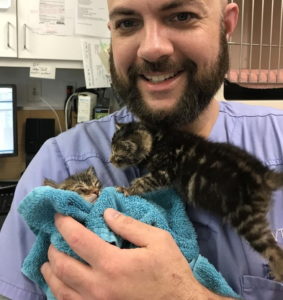 “I brought them to work so I could feed and play with them between appointments.

The man successfully accustomed the kittens to “adult” food. But they still squeak at the sight of the coveted bottle of formula. 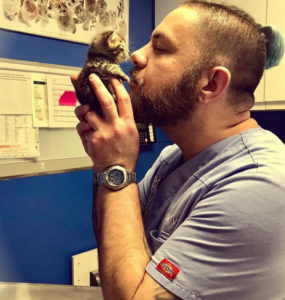 Gil makes sure his charges get plenty of hugs, kisses and love throughout the day.

A month ago the kittens were dying, but now they are healthy, strong and constantly purring.

“It’s already time to get them ready for adoption, though it’s hard for me to even think about parting with them. Santo likes to look me in the eye while he plays with my beard at bedtime, to come. Donatella meows loudly for me to pick her up and rub her tummy,” Gil enthuses.

“I get a sea of pleasure whenever I see them, playful, running around the room. I tried really hard to save them and now they’re happy-it’s an amazing feeling of accomplishment.” 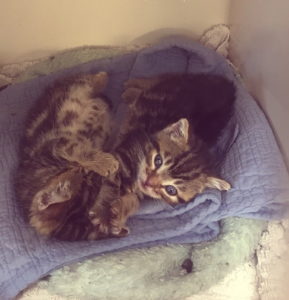