A cat named Tea lived in a small English town with the Mendoza-Jones family. The cat was five years old and her owners, Sam and Kira, had never noticed anything strange about their pet. The cat was affectionate, liked to walk, sometimes even caught mice. But in general, she behaved like an ordinary house cat. One day the pet suddenly had a new habit. Every morning she began to bring someone else’s work gloves on the owner’s doorstep. In the first month of her strange hobby, the cat brought 30 gloves into the house. 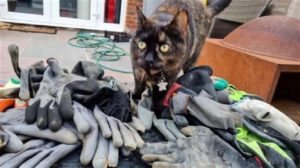 There was an active construction site in the area where the family lived. Therefore, the gloves most likely belonged to construction workers, who often left them just on the construction site at the end of the work day. Among the gloves were many worn and dirty, so the cat’s owners’ guess was very plausible. The couple decided to take pictures of all the gloves and posted their photos on social media, in one of the city groups, so that the owners could find their possessions. 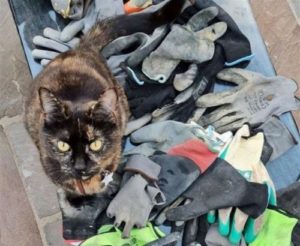 What is interesting about Tea’s behavior is not only her unusual choice of “gifts” for her owners, but also the fact that she demands gratitude from her owners with all her appearance. The cat brings its “prey” very early and starts meowing furiously, demanding that the owners leave the house and thank it by caressing it. Only after the expressed gratitude does Tea calm down and lose all interest in its prey.