A couple in New York City lost their cat. They were so used to their pet that after grieving for several months, they decided to adopt the cat from a shelter. 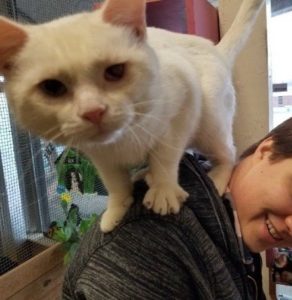 As soon as they crossed the threshold, a very beautiful white fluffy cat ran out to meet them. The cat climbed onto Stephanie’s boyfriend’s neck and started purring. 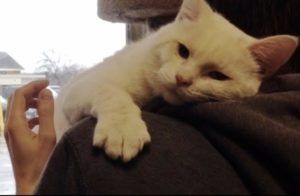 The couple was very attracted to the funny kitty. Their hearts melted at the sight of him gently cuddling the man. Stephanie managed to capture the memorable moment on her cell phone camera. They immediately named the cat Oliver. That was the name of their deceased kitty. 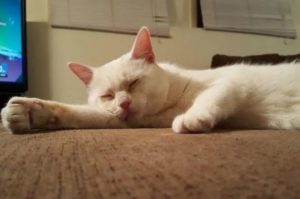 Unfortunately their new friend had some health problems. Volunteers at the shelter immediately warned the couple about this. But that didn’t stop them at all.

Oliver needs constant care. He gets regular eye and ear injections. On his first day in his new home, he did not go anywhere from his rescuers and was afraid of everything. The couple took the day off to relieve the animal’s stress and be there for him. 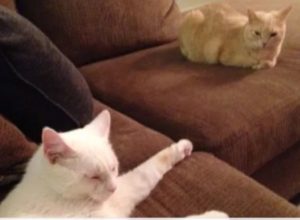 The most interesting thing is that at that time there was already another cat living in the house. At first the animals did not get along, but then they became best friends.